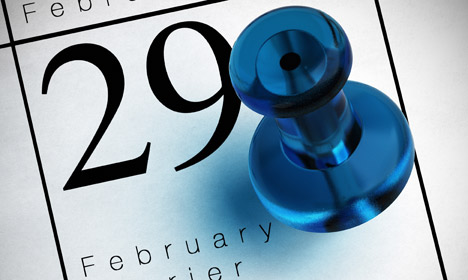 Photo: Colourbox
The Henriksen family from Andenes on the island of Andøy can claim a distinction shared by no other family in the world. Siblings Heidi, Olav and Leif-Martin all share a Leap Day birthday.
Heidi was born on February 29th, 1960. Olav came four years to the day later and Leif-Martin made his entry into the world four years after that.
Their mother, Karin, is believed to be the only woman to ever give birth on three Leap Days.
This fun fact is often trotted out every fourth year by media around the world, making the Henriksen siblings minor celebrities.
“I don’t tend to announce it, but when I do say it there are many who can’t believe it. And I can understand that – the odds for it are sky-high,” she told VG.
The Henriksens said that their unusual birthdays have netted them a long line of international media appearances since their mother was added to the 1980 Guinness World Records for her impeccable timing in delivering babies.
“It’s probably a bit more special for others than for us. I think that has something to do with the fact that we didn’t contribute directly to the records ourselves,” Leif Martin said.
Somewhat incredibly, Leap Day also has another – and sadder – meaning for the family as well. The siblings had a nephew who passed away from cancer on February 29th, 2008. Since then, they say that the day has been a mix of joy and sadness. They don’t plan to make a big deal out of their birthdays on Monday.
“It will be calm this year. I think the next big celebration will be when I turn 50 in two years,” Leif Martin told VG.
An estimated five million people worldwide have Leap Day birthdays.