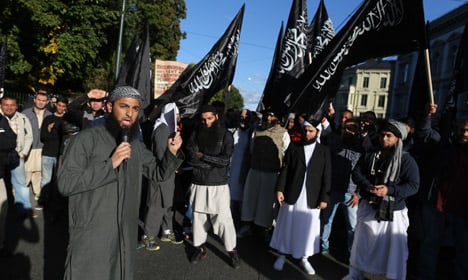 Radical Islamists protest outside the US Embassy in Oslo in 2012. Photo: Kyrre Lien / NTB scanpix
“In response to the infidel group Soldiers of Odin patrols, we Muslims have chosen to create a group that will patrol the streets, first in Oslo, to prevent evil and encourage the good,” a source within the Islamist environment told VG.
The group is officially calling itself Jundullaah, translated to English as ‘Soldiers of Allah’ or Norwegian as ‘Allaahs soldater’.
Someone claiming to be a member of the group sent VG what they said would be the Soldiers of Allah’s official uniform: a black hoodie decorated with the black flag of terror group Isis.
The Norwegian Police Security Service (Politiets Sikkerhetstjeneste – PST) declined to comment on the group, but Labour’s deputy leader Hadia Tajik strongly condemned both of Norway’s new self-declared ‘patrol’ groups.
“Vigilantism does not belong in Norway, whether they do it in the name of Odin or Allah. I assume that the police, who are the only ones who have the authority to patrol the streets and use force, are following these groups as closely as the circumstances require,” she said.
Based on the Finnish group of the same name, which has links to neo-Nazis and was founded last year in response to a record number of migrants and refugees arriving in Europe, the Soldiers of Odin first appeared in Norway on February 13th when a group of 14 men spent three hours walking the streets of Tønsberg.
Since then, they have spread to at least three other Norwegian cities, causing considerable hand-wringing amongst Norwegian politicians.
The Soldiers of Odin have reportedly kicked out the group’s most prominent Norwegian spokesman, Ronny Alte, for his response to the Soldiers of Allah.
The website Vepsen reported that the group took issue with Alte’s remarks about the Islamist group, saying that his comments about a potential clash between the two groups was damaging for the Soldiers of Odin’s image.
Alte told VG that things could “begin to get dangerous” if the Soldiers of Allah used their patrols to recruit extremists and said that the two groups have “two completely different viewpoints”.
“We want safe streets but they want to use coercion and oppression. That they use a word like ‘infidel’ to describe us really forces a reaction from me. What will they do – force us to convert?” he said.
“That they say the want to patrol for ’the good’ means nothing. What is good for us and what is good for them are two different things,” he added.
Those comments were enough for other members of the group to disassociate themselves with Alte, a former member of Islamophobic groupings such as the Norwegian Defence League and German-based Pegida.
Url copied to clipboard!