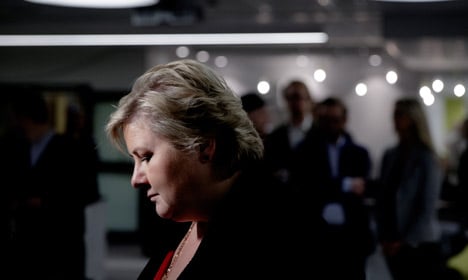 Norwegian Prime Minister Erna Solberg is proposing emergency legislation that would allow Norway to deny entry to all asylum seekers who do not come directly from countries in conflict.

Solberg said that the legislation would only be implemented in an emergency situation and would protect Norway from the deteriorating situation within the Schengen region and the mounting strain the Swedish asylum system is facing from the current refugee crisis in Europe.

Under her plan, asylum seekers entering from Russia or other Nordic countries would be immediately rejected if they are not coming directly from areas of conflict.

The legislation would go against the UN Refugee Convention and has therefore faced strong criticism, but Solberg said it would only be implemented in the face of a complete breakdown of Sweden's asylum system, which took in 163,000 asylum seekers in 2015 and expects an additional 100,000 this year.

“It is a force majeure proposal which we will have in the event that it all breaks down, the influx continues and everyone ends up in Norway because we are at the outer edge of Europe,” Solberg told Danish daily Berlingske.

“Norway is the last stop, isn't it?” she added.
Even though the PM said her proposal would only be used in emergency situations, it has been slammed by the Norwegian Lawyers' Association as a direct violation of Norway’s international obligations.
“Several of these proposals violate human rights. We see the law as a rushed proposal,” Bente Mostad Tjugum, the head of the association's asylum and immigration committee, told broadcaster NRK.

Solberg has defended the proposed legislation as a safety net for Norway.

“If the mechanisms in place in Europe do not work, then we have a chance to reject them [asylum seekers, ed.]. It is not a suggestion that we should do such a thing in the future, but it is a legal security measure if other countries fail to live up to their obligations,” Solberg continued.

The legislation will be presented to parliament soon, and is expected to gain broad support as Norway has begun adopting stricter refugee policies. Parties continue to bicker, however, over the government's 40-point asylum plan.