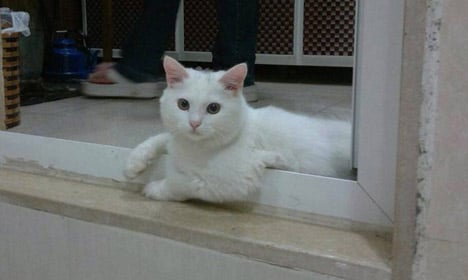 After two months apart, Kunush is now back with his family – now in Norway. Photo: Reunite Dias/Facebook
After volunteer aid workers found a dazed cat on the Greek island of Lesbos in November 2015, they named it Dias and launched a Facebook campaign to find its owners.
Two months later – and much further north – the Al Alaf family recognized the cat as Kunkush, who they say got split from the family when they arrived on Lesbos by boat.
The Al Alafs told local newspaper Trønder-Avisa that they fled Mosul in Iraq when Isis fighters threatened to marry the family’s daughters. They left with few belongings but couldn’t bare to part with Kunush and tried to take the family pet along on their perilous journey.
When their boat landed on Lesbos, the family lost the cat in the chaos of their arrival. A few days later the cat was taken in by a local veterinarian. The Al Alafs had already moved on by then but a volunteer later took the cat to Berlin and began the search for its family.
Through the help of the internet and a 6,000-person strong Facebook page, the campaign to reunite the cat with its owners succeeded on February 12th when the Al Alaf family was located in Steinkjer.
The family recognized ‘Dias’ as their beloved Kunkush and on Thursday, they were tearfully reunited with their cat. See the reunion here, courtesy of The Guardian.
Url copied to clipboard!