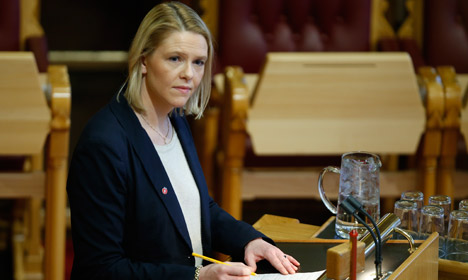 Sylvi Listhaug. Photo: Terje Pedersen / NTB scanpix
Minister of Migration and Integration Sylvi Listhaug has been in the eye of a political storm for weeks, as critics attack her harsh immigration rhetoric and policies that they say only focus on keeping people out of Norway rather than addressing how to integrate them into Norwegian society.
On Wednesday, Labour Party spokeswoman Helga Pedersen essentially accused the government of having no integration plan whatsoever.
“Last year, over 30,000 asylum seekers came to Norway. The majority of these will likely be granted residency in Norway. It is an enormous task to house and integrate them in Norway. Therefore we need an active integration policy – and I don’t think our current government has one,” Pedersen said in parliament.
Listhaug has fought back at critics by saying integration is simply not possible unless Norway gets a handle on how many people come in to the country.
“If we are to succeed with integration, we need to have control over the influx. I will not change the way I talk [about the issue],” she said at a Tuesday meeting in Kristiansand, according to news agency NTB.
She said that her rhetoric can “absolutely not” be blamed for the waffling support for the hard-line asylum package and instead accused her critics of using her as a scapegoat.
See also: Norway under fire over tough new asylum plans
“It would be directly irresponsible if parties in parliament vote against the proposal because they don’t like my choice of words or want to ensure that the government is handed a defeat,” she said.
Listhaug, who represents the anti-immigration Progress Party (Fremskrittspartiet), announced her 40-point plan in December by saying that a continued increase in asylum seekers could have “devastating consequences” for Norwegian society.
She said this week that she sees no need to change the way she addresses the issue.
“I will continue to talk about immigration. The Norwegian society has nothing to gain by sweeping the problems under the rug,” she said.
After a tumultuous few weeks of wavering support for the asylum plans and criticism of Listhaug’s approach, the government has now asked all political parties behind the asylum plan to meet in Prime Minister Erna Solberg’s office on March 1st to find a way to move forward.
Listhaug said that the meeting would be used to go through the 40 initiatives and “clarify issues that are unresolved and identify the points that are the most difficult” to find agreement on.
Proposals in Listhaug’s plan include tighter rules on family reunification and a minimum period of five years before permanent residence is granted, an increase from the previous three years. Underage asylum seekers under 18 will also have their cases reassessed when they turn 18, and the bar for refugees’ language and cultural understanding requirements will be set higher.
The plan calls for refugees to have held a job or been in education for four years before they can bring their family members to Norway. That goes even further than the country’s southern neighbour Denmark, which has been heavily criticized for making refugees wait three years to be reunited with their families. The Norwegian Bar Association has warned that Listhaug’s proposal will violate Norway’s international conventions.
See also: Norway asylum policies 'a copy of Denmark'
In parliament on Wednesday, Listhaug declined to say if she would be willing to change some of the proposal’s more controversial elements in order to obtain wider support, saying only that the need for tighter rules is as relevant today as when the government first put forth its proposal.
“We will face an enormous challenge this year. It is expected that twice as many asylum seekers will come to Europe than the year before,” she said.