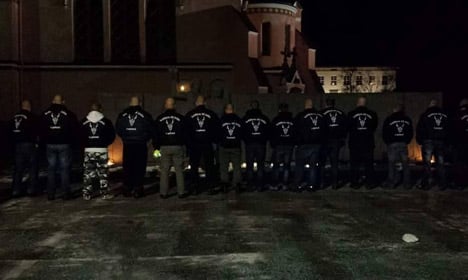 The Soldiers of Odin were established in Finland but claim to have supporters throughout Europe. Photo: Soldiers of Odin Finland ry/Facebook
On Saturday night, a group of 14 men wearing black coats bearing the insignia of the Soldiers of Odin spent three hours walking the streets of Tønsberg in southern Norway. This marked the first appearance in Norway of the self-proclaimed ‘patriot’ group that has been at the centre of controversy in Finland.
Named after the Norse god, the Soldiers of Odin have been active in Finland since late 2015, patrolling public streets of Kemi, some 30km from the border town of Tornio, which serves as a major crossing point for asylum seekers.
The group calls itself “a patriotic organisation that fights for a white Finland” and says its patrols are meant to scare away “Islamist intruders” that the group says “cause insecurity and increase crime”.
The first Norwegian incarnation of the group said it was out in Tønsberg because “we just want it to be safe in the city” in the face of “out of control” immigration, spokesman Ronny Alte told VG.
“We don’t care about religion or skin colour,” he said.
According to VG, the Soldiers of Odin met heavy resistance from the town’s inhabitants. One woman asked the group why they thought Tønsberg needed their “protection”.
“Don’t you think that immigration in Norway has gotten out of control?” Alte responded. “Don’t you see that illegal immigrants are committing crimes, selling drugs and harass Norwegian women?”
Olav Sannes Vika, a Socialist Left Party politician who turned out to confront the group, said that the Soldiers of Odin was not welcome in the city.
“In Tønsberg, we don’t have a big problem with violent rapes and drug crimes in the city centres on the weekends. We don’t want patrols here. We don’t want you here in our city,” he said, according to VG.
Local newspaper Tønsbergs Blad reported that among the 14 Soldiers of Odin were well-known members of the extreme far-right including some who have criminal records.
Police were out in extra numbers to ensure no violent conflicts as the Soldiers of Odin made their Norwegian debut.
“It is solely the responsibility of the police to enforce law and order, but if they walk through the city and behave properly, they should naturally be left in peace,” Frank Gran said.
In a Facebook post on Monday morning, Soldiers of Odin’s Norwegian spokesman Ronny Alte said that the group has been misunderstood.
“I can see that a who lot of people haven’t figured out what Soldiers of Odin wants, but really ‘safe streets for everybody’ should sum it up,” he wrote.
Alte said that the group would respect the wishes of those who do not want its help.
A Daily Mail video on the Finnish Soldiers of Odin can be seen below: