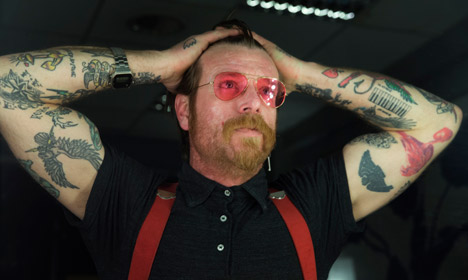 The singer said he hopes expectations will be met when the Eagles of Death Metal meet the fans who survived the November 13 massacre in Paris's Bataclan concert hall.
“It will be so much more than just a show. Many more from Bataclan are coming than I expected. It is so beautiful. It is a display of courage,” he told NTB.
The American band is back in Europe after their tour was cancelled in the most horrendous way imaginable in Paris on November 13 of last year.
Their Sunday night concert at Sentrum Scene in Oslo was just the second of their ‘Nos Amis Tour’, dedicated to those who were killed. The band was greeted by several minutes of applause when they walked on the Oslo stage.
“We needed you tonight and you came. Amen,” Hughes told the Norwegian audience.
Then the party started. Despite their name, the Eagles of Death Metal are about partying and good times.
See also: Survivors torn by Eagles of Death Metal Paris gig
The ritual
Just a few hours earlier, Hughes cried his way through at least four interviews with the Norwegian press. On Saturday, he shared the tragedy with the Swedes and in the coming days he will sit down with French media.
This is Hughes’s self-imposed ritual. He dives into the traumatic story again and again, hoping that it will help him move on. Telling the story, playing rock ’n’ roll and making fans happy. That’s the therapy he has chosen.
“I cannot negotiate with my emotions. They are still raw. I would have hoped that they would have faded some after three months, but it has not gotten easier. There are things I wish I couldn’t see so clearly, sounds that I can’t stop hearing and smells that I wish I knew nothing about,” he said.
“There are times in which it is so overwhelming that I feel like I can’t breathe,” he said in obvious despair.
Saw friends die
A total of 89 people were killed with Islamist extremists attacked the Bataclan venue. Hughes hid behind the stage curtain.
“I was waiting for the bastard to reload. I stood there and waited until we could escape while at the same time I could see that three people I cared about were dead,” he said.
Among the victims were three members of the band’s road crew. But Hughes also stresses the close relationship he has with fans. Two of them died in front of his eyes, hours after they had been shopping together in Paris.
“I can’t get the picture out of my head,” he said.
See also: Terrorists 'wanted Yanks' during Bataclan attack
Hughes admitted that during the band’s Saturday night concert in Stockholm, their first after the Paris terror, that he constantly scanned the audience and the venue.
Despite the tragedy, he said it is easy to get back up on the stage thanks to the support of fans. And Hughes, an outspoken Christian, said he sees it as a sacred duty to complete his job.
Friends from Turbonegro
It was was not a coincidence that the band chose Scandinavia as the place to restart their tour. The fans here always show up, he said. Support comes not only from the fans but also from Hughes’s friends Thomas Seltzer and Knut Schreiner from the Norwegian band Turbonegro.
“Tom is like a mother hen,” a smiling Hughes said, adding that Seltzer contacted him just an hour after the Paris attacks.
Hughes said that it was Turbonegro that got him into rock and roll with their combination of music and fun. The very name Eagles of Death Metal is a joke, he said.
“It was Turbonegro that moved me in that direction. Our band is about having fun. I have concluded that the best way to move forward is to continue to take it wasy and have fun,” Hughes said.
The Eagles of Death Metal play Paris on Tuesday.

PARTNER CONTENT
‘I’m no longer afraid of failure’: the European MBA to help you conquer your fears

PARTNER CONTENT
VIDEO: My Parisian life: working in ‘the heart of the luxury industry’
Url copied to clipboard!