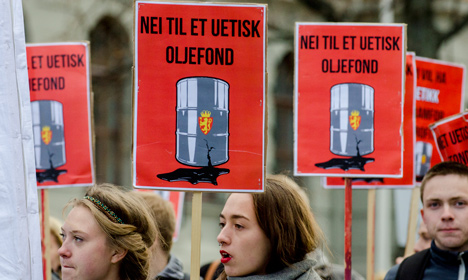 Demonstrators in Trondheim protest against "an unethical oil fund" in 2015. Photo: Ned Alley / NTB scanpix
The Norwegian state pension fund's annual report relating to “responsible investment” did not give the names of companies, but it indicated that most were coal or energy companies using coal, as well as those involved in mining, producing cement and heavy construction.
“We want to measure the risk in our investments,” said the head of the fund, Yngve Slyngstad, in a statement.
“We expect companies to communicate the impact of their activities on the environment and the factors that could affect their long-term profitability,” he said.
The fund is currently worth around $794 billion (€734 billion), equivalent to around six annual budgets or more than 137,000 euros for each of the country's 5.2 million inhabitants.
Fueled from Norway's huge oil and gas revenues, the fund is intended to pay for future generations in the welfare-state after the country's wells run dry.
Over the past four years, the fund has divested from 187 companies. Those decisions were made for financial reasons, which increasingly take into account social and environmental activities by the company and their impact on profit.
The fund can also exclude companies for purely ethical reasons when they are seen to be in serious violation of human rights, or are producers of nuclear weapons or tobacco.
Among those excluded have been some of the world's biggest corporations such as Boeing, Lockheed Martin, Rio Tinto, Philip Morris and British American Tobacco.
The fund invests in a total of more than 9,000 companies and is considered a trailblazer in applying ethical considerations to investments.