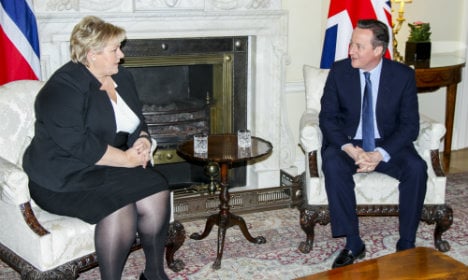 At Thursday's conference of donor countries in London, Norwegian Prime Minister Erna Solberg pledged 10 billion kroner – around $1.2 billion or €1.05 billion – in aid response to the Syrian conflict between now and 2020. The sum represents one seventh of what the United Nations asked countries to pledge at the conference.

Norway is co-hosted Thursday's event in London along with the United Kingdom, Kuwait, Germany and the United Nations.

An Oxfam report released prior to the conference revealed that, in 2015, Norway gave over three times the amount expected relative to its gross national income – making it the world’s second biggest relative donor to Syrian aid after Kuwait.

Solberg said on Thursday that she felt some of the other countries are capable of donating more than they have pledged.

“Some countries ought to give more, based on the nature of the crisis,” Solberg told broadcaster NRK.

“The eastern European countries should give more, even though their budgets are smaller,” she added.

Organisers have already agreed that participants should at least “double” their contributions from 2015, when they raised $3.3 billion. Norwegian Foreign Minister Børge Brende said there was a “moral imperative, human imperative” to act.

“It's a lost generation if we're not successful tomorrow,” he said ahead of the conference.

Aid from the conference will be targeted at helping the economies of Syria's neighbours, creating jobs for refugees and citizens of their host countries. It will also go towards food, shelter, medical care and rebuilding health facilities in Syria itself.

Ahead of the conference, Britain pledged $1.74 billion in aid, to be spent between 2016 and 2020, to address what Cameron called “the world's biggest humanitarian crisis”.

“With hundreds of thousands of people risking their lives crossing the Aegean or the Balkans, now is the time to take a new approach to the humanitarian disaster in Syria,” Cameron said.

Both Solberg and Cameron have said that increased aid can help to reduce the number of refugees heading for Europe.

“The most important thing is for the [Syrian] opposition and government to find a transitional agreement and a government that can fight IS and secure a safe Syria. But we can’t allow children to lose their education and let people die of hunger on the way,” Solberg told NRK.