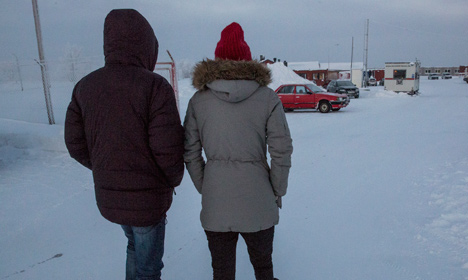 Jan-Morten Bjørnbakk / NTB scanpix
Norway temporarily halted its return of migrants — mainly from Syria, Afghanistan, Iran and Iraq — who had entered from Russia on January 23rd following a request from Moscow.
Some 5,500 migrants crossed from Russia into Norway last year, on the last leg of an arduous journey through the Arctic to Europe. But the right-wing government in Oslo has decided that migrants who had been living legally in Russia, or had entered Russia legally, should be immediately returned there, on the basis that Russia is a safe country.
See also: Norway suspends return of migrants from Russia
Officials from both nations will now meet on Wednesday to try to find a solution to the currently gridlocked situation.
The two sides will try to find agreement on which asylum seekers can be sent back to Russia. Moscow has said that it will not take any asylum seekers who crossed into Norway on non-returnable visas, while Oslo argues that the Russians are obligated to take them back under a 2008 bilateral agreement.
Arlid Moe, a senior researcher and Russia expert at the Fridtjof Nansen Institute, said that the Norwegian government was probably too optimistic in its assessment that the Russians would take back the rejected asylum seekers.
“They [the Norwegian authorities, ed.] may have had a legitimate believe that everything was fine since the returns went smoothly before Christmas,” he told NTB.
Moe said that an internal Russian decision likely led to Moscow’s change in course.
“We are so self-centred in Norway and are so inclined to believe that it is what we do – or don’t do – that is essential, but I think it is more likely that the Russians have had internal discussions that ended with a new assessment,” he added.
Moe said that a key element in the two sides finding a solution will be whether Russia will commit to stopping foreigners without a Schengen visa before they pass the Russian border and continue on to Norway’s Storskog border crossing, where they can seek asylum.
“My understanding of the Russian border regime is that Russians without Schengen visas have been stopped well before the Storskog border while foreigners have been allowed to pass, but there had been so few of these up until last autumn. When so many other asylum seekers discovered this route, the news travelled quickly and resulted in a large influx. I don’t think this development was in any way caused by something the Russians did,” Moe added.
According to NTB, Wednesday’s meeting will also address reports that a former diplomat in the Russian Foreign Ministry is behind five different companies that issued false work permits to around 1,000 Syrians.
“It is natural to get further information on what the Russian authorities knew about this,” Norwegian Foreign Ministry official Tore Hattrem told NTB.