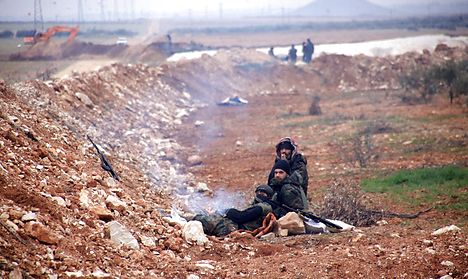 Syrian government forces hold a position in the village of Ain al-Beida in the Syrian northern Aleppo province after taking control of the area from Islamist jihadists. Photo: GEORGE OURFALIAN/AFP/SCA
On a call between the leaders of Britain, Germany and Norway, they agreed “that all countries in attendance should look to at least double their 2015 financial contribution to the crisis,” Prime Minister David Cameron's office said in a statement.
Britain, Germany and Norway are co-hosting the event on February 4 with the United Nations and Kuwait. Leaders from around the world are expected to attend.
They will discuss how to help 13.5 million people who are either vulnerable or displaced inside Syria, as well as 4.2 million people who have fled to neighbouring countries like Jordan and Lebanon.
Last year, UN agencies asked for $8.4 billion (€7.7 billion) from governments worldwide to fund the Syrian aid effort but received only $3.3 billion.
The call between Cameron, German Chancellor Angela Merkel and Norwegian Prime Minister Erna Solberg also agreed that the conference would bid to “secure an ambitious package of measures to spur economic growth and enable thousands of Syrian refugees across the region to work, as well as helping host countries deal with the impact.”
Cameron also spoke to Saudi Arabia's King Salman, who promised “high-level attendance” from his country at the talks, Downing Street said.
More than a million migrants and refugees, many from Syria, crossed into Europe last year.
This has caused the continent's worst migration crisis since World War II and prompted the European Union to consider allowing states in the passport-free Schengen zone to reintroduce border checks for up to two years.
The conflict in Syria erupted in 2011 as a pro-democracy uprising but has developed into a civil war, complicated by the rise of Islamic State jihadists.