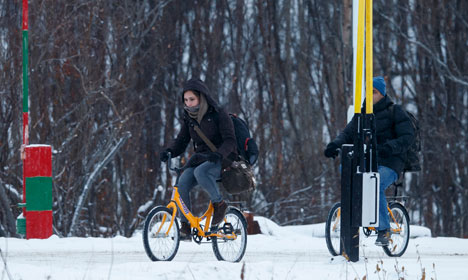 Asylum seekers cross the Norwegian-Russian border in November. Photo: Cornelius Poppe / NTB scanpix
A long line of Norwegian politicians distanced themselves from Denmark’s controversial bill allowing for the confiscation of cash and valuables from migrants, but Norway’s rules on how much an asylum seeker can bring in to the country are actually stricter, broadcaster NRK reported.
Denmark on Tuesday approved a sweeping immigration bill that among other things gives authorities the ability to confiscate cash and valuables worth more than 10,000 Danish kroner (around 12,500 Norwegian kroner).
See also: PM: Norway will not seize valuables from migrants
The Danish government has said that the cash and valuables will be used to offset asylum seekers’ stay in the country and use of social services.
The regulations of the Norwegian Directorate of Immigration (UDI), however, state that asylum seekers who enter the country with more than 5,000 kroner risk losing access to social benefits.
In contrast to Denmark, Norway’s rules do not allow the police to confiscate any cash or valuables.
Still the lower monetary limit has led some to accuse Norwegian politicians of hypocrisy for joining in the international chorus of critics of the Danish law.
“If you just look at the value limit, the Norwegian rules are without a doubt more strict than the Danish law,” lawyer Cecile Schjatvet told NRK.
Christian Democrats spokeswoman Dagrun Eriksen said that few Norwegian politicians were aware of the rule. Now that it’s come to her attention, she said the value limit should be raised.
“I want to change the current rules in Norway. Five thousand kroner is too low. Even though the authorities don’t confiscate valuables worth more than 5,000 kroner, that isn’t the same as having a ban against confiscation,” she told NRK.
Denmark’s new bill has been heavily criticised by the international media and human rights groups.
See also: Denmark faces backlash over 'despicable' 'jewellery law'
Norway's rules aren't the only ones that are stricter than the provision passed in Denmark. Germany also long established rules on confiscating refugees’ valuables which are stricter than those set out by the new Danish law.
In Bavaria – where the vast majority of refugees arrive in the country – cash and valuables are confiscated with a value of over €750 (5,600 kroner). In the neighbouring southern state of Baden-Württemberg the rules are even stricter. There, refugees can have valuables worth more than €350 (2,600 kroner) taken from them.
Meanwhile in North Rhine-Westphalia refugees are only allowed to have €200 (1,500 kroner) in valuables before local authorities start taking their possessions.
Url copied to clipboard!