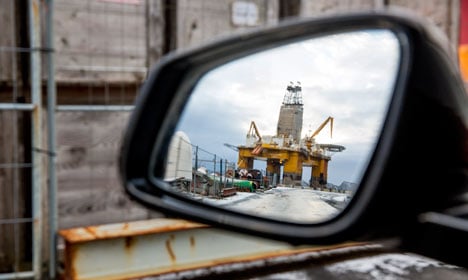 Norway has prepared for when its oil wealth is behind it. Photo: Foto: Tore Meek / NTB scanpix
Oslo has prudently tucked away most of its oil money since the 1990s in order to be able to finance its generous welfare state indefinitely.
Invested in stocks, bonds and real estate, the fund is now worth around 6.96 trillion kroner (€734 billion, $794 billion), equivalent to around six annual budgets or more than €137,000 for each of the country's 5.2 million inhabitants.
“We sold a lot of oil when the prices were high and saved a lot of the money we received,” explained Ragnar Torvik, economics professor at the Norwegian University of Science and Technology in Trondheim.
“As a result, the Norwegian economy is well-equipped to withstand a drop in the oil price seeing as the latter has little impact on public finances,” he added.
But it is strictly forbidden to touch the riches in what Norwegians call both the “oil fund” and the “pension fund” with governments only allowed to tap the returns, estimated at around 4.0 percent, and not the capital.
The sums at the authorities' disposal swell as the fund continues to grow, fuelled by new oil revenues and the return on investment. And it has even grown so fast the current rightwing government only intends to use 2.8 percent of its nest egg for 2016.
'Not a crisis fund'
“It's not a crisis fund. It's a fund that is supposed to bring a regular contribution to the state budget,” explained Handelsbanken economist Knut Anton Mork.
“This input… today finances about one-eighth of all public spending in Norway. It's a lot but it's independent of the oil price because it's the financial return that is behind that,” he said.
The oil price has fallen from more than $110 a barrel in the summer of 2014 to around $30 today, but the only financial impact for Norway is that the fund's growth curve has slowed.
“It's important because it determines the size that the fund will end up being. We thought it would continue to grow for a long time but if the oil price remains low for a long time, that won't be the case,” Mork said.
While public finances have not been affected by the low oil price, it's a different story entirely for the real economy: oil investments have declined, growth is sluggish, and the unemployment rate, at 4.6 percent, is higher than it has been in more than a decade — even though it remains the envy of many countries.
Since the start of 2014, almost 30,000 jobs have been cut in the oil sector, including at oil and gas giant Statoil. Stavanger, until recently Norway's thriving oil capital, is in the doldrums.
To kick-start business, the government has presented an expansionary budget and the central bank has slashed its key rate in half. Partly compensating for the decline in oil income, the Norwegian krone has weakened considerably, boosting competitiveness in other sectors.
Black gold's hold
“As a whole, the Norwegian economy is not in crisis,” Finance Minister Siv Jensen said on Monday.
“But it's a crisis for the regions, the sectors, the companies and the families affected by the long-term structural transformation of the economy,” she said.
Aware that its oil and gas reserves are on the decline and that the deposits that remain are often expensive — even too expensive — to exploit, the country has for several years said it intends to break its dependence on black gold.
As it hopes to convert its economy into one based on renewable energies, new technologies and fish farming, the drop in the oil price has only sped up thoughts in this direction.