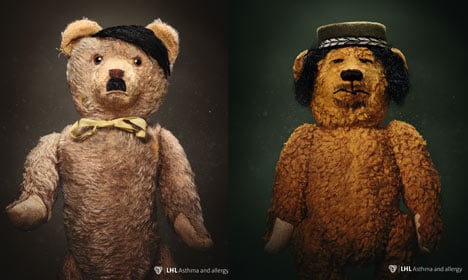 Teddy bear Hitler and Gaddafi. Photos: LHL Astma og allergi/Kitchen
They might look sweet and cuddly, but could teddy bears actually pose a threat to children's health?
That’s what the Norwegian Heart and Lung Association (LHL) hopes a controversial advertising campaign will prompt parents to consider.
The organization established a special unit to focus on the rising number of Norwegian children affected by asthma and allergies. To drive home its message that teddy bears can collect dust that threatens children’s health, LHL Asthma and Allergy teamed up with advertising firm Kitchen to launch a campaign featuring stuffed animals made to look like dictators Adolf Hitler, Muammar Gaddafi and Kim Jong-il. “By focusing on children's bedrooms we want to stop the problem of asthma and allergies before it even starts to develop. This campaign addresses how dangerous stuffed animals can be if they are not washed regularly,” Kitchen copywriter Bendik Romstad told The Local.
“For children, stuffed animals can be just as dangerous as the world´s worst despots,” she added.
The campaign has garnered significant attention within Norway since its launch earlier this month.
“With a simple and clear message combined with a very bold idea we managed to turn LHL Asthma and Allergy from an organization no one knew to being on everyone’s lips. But most importantly, the Norwegian people became aware of a very important fact – that they have to wash their stuffed animals so they don´t become dangerous!” Kitchen copywriter Maren Gimnes said. But the campaign is not without its detractors. The leader of the Norwegian Jewish society Det Mosaiske Trossamfund said that portraying Hitler as a teddy bear threatens to soften his image.
“Hitler was a mass murderer and he doesn’t deserve this kind of attention,” Ervin Kohn told Dagbladet. “I’m worried that Hitler can be made to seem less dangerous when he’s used in such a way.”
Sociologist Trond Blindheim agreed that portraying Hitler, Kim and Gadaffi as teddy bears is “as absurd and morbid as it gets” but argued that this precisely why the campaign is a success.
“These are people who were mass murderers and that has the paradoxical effect that people see the humour in it. Hitler as a teddy bear will achieve precisely the effect LHL wants,” he told Dagbladet.
LHL Asthma and Allergy said that the number of children with asthma and allergies in Norway has increased four-fold since the 1970s and today more than 20 percent of children are affected.
The organization encourages parents to wash their children’s teddy bears four times per year and to always wash children’s bedding at 60C in order to reduce the risk of asthma and allergies.