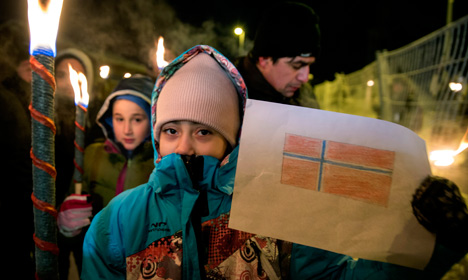 11-year-old Sama will be sent out of Norway because her Syrian parents were given the wrong type of visa by a human smuggler. Photo: Jan-Morten Bjørnbakk / NTB scanpix
Syrian couple Dallia Asaad, 33, and Samer Wardeh, 42, came over the Storskog border crossing into Norway on October 25 along with their three children, aged eleven, nine and one and a half. Now they are being returned because the human smugglers they used gave them the wrong type of visa.
“When we paid $22,000 to take the Arctic route to Norway, we didn’t think about what sort of visa we received in Russia. Before the war in Syria, we had never been abroad,” a distressed Dallia Asaad told NTB in Kirkenes, where temperatures were at -30C.
“We were in Russia for four days and now the Norwegian UDI [Directorate of Immigration, ed.] won’t consider our case. We are being sent to death by the Norwegian police. What will happen to us when we are sent to Russia without any money? We are desperate,” Dallia added.
Story continues below Syrian couple Dallia Asaad and Samer Wardeh and their children were joined by local activists to protest against their looming deportation. Photo: Jan-Morten Bjørnbakk / NTB scanpix
Safe in Russia
Fifty to 60 people waiting to be returned to Russia found themselves on Wednesday at Ankomstsenter Finnmark, an asylum centre in Kirkenes. They have not had their asylum applications assessed but are being deported in line with the instructions the Norwegian government gave UDI before Christmas. The National Police Immigration Service Norway (Politiets utlendingsenhet – PU) plans to send a new bus full of asylum seekers out on Thursday. On Tuesday, 13 others were returned to Murmansk.
“Those who are being returned now are people who have valid residence in Russia. That means that they can safely live in Russia,” UDI’s local leader in Sør-Vanger, Siri Rustad, told NTB.
She said that the Norwegian authorities’ evaluation of Russia as a safe country must be honoured.
Not safe
Around 100 people demonstrated against the deportations on Wednesday night with torches and song.
“We are reacting very strongly to what is happening here, these inhumane transports out of Norway,” Eirik Nilsen from the group Refugees Welcome to Arctic told NTB.
“We do not believe it is safe at all [to send people back to Russia],” he added.
The Norwegian Helsinki Committee, which works closely with several organizations in Russia, has little confidence that the Russian authorities will take responsibility for the people being returned by Norway.
There is a real danger that people will be left on their own in northern Russia and could even freeze to death in the cold, senior adviser Inna Sangadzhieva said.
“They are left completely to themselves. If they don’t have money and don’t know the language, they will have to merely hope that someone can help them,” she told NTB.
Sangadzhieva used Wednesday to contact Civic Assistance Committee and other organizations that help illegal migrants and asylum seekers in Murmansk, Moscow and St. Petersburg, notifying the groups about Norway’s plans to return rejected asylum seekers.
Given clothes and food
PU’s leader in Kirkenes, Tor Espen Halga, said the agency views the deportations as justifiable.
“We make assignments on how they can take care of themselves, without me going into detail about it. But since you bring up clothing, I can say that we have made assessments on whether they are properly dressed,” he told NTB.
Those who need it are given warm clothing before their departure, he said. They are also given a packed lunch.
“We will drop them off in a city under our agreement with the Russian authorities – either Nikel or Murmansk. Then they must fend for themselves,” the police officer said, adding that the Russian authorities will then be responsible for what happens on their side of the border.