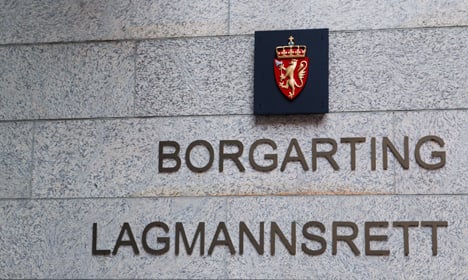 The Court of Appeals upheld the Oslo District Court's earlier ruling. Photo: Berit Roald / Scanpix
Two men, a 29-year-old Norwegian-Albanian and a 31-year-old Norwegian-Somali, were sentenced for having engaged in armed conflict for the extremist group Isis in Syria. Their sentences were four years and six months and four years and nine months, respectively.
A third man, a 26-year-old Norwegian-Albanian was convicted of attempting to send goods to a brother who fought for Isis in Syria. He was sentenced to eight months in prison.
The sentences marked the first time that a Norwegian high court has taken a position on a case concerning a ban on joining or supporting a terrorist organization. The new section of the penal code was introduced in the summer of 2013 and allows for a maximum imprisonment of six years for “creating, joining, recruiting members for, or providing financial or other material support to a terrorist organization”.
The three men were convicted in Oslo District Court in May 2015.
In the Court of Appeals ruling, the court referred to Isis as “one of the worst terror organizations of our time”.
“All of the accused swore allegiance to Isis and put themselves under the organization’s command. Although there isn’t sufficient evidence that some of them directly participated in hostilities, the court characterises them as foreign fighters,” the ruling continued.
All three men have denied the guilt and at least one, the 29-year-old Norwegian-Albanian, announced plans to appeal the case to the Supreme Court. Lawyers for the other two men asked for time to consider an appeal.