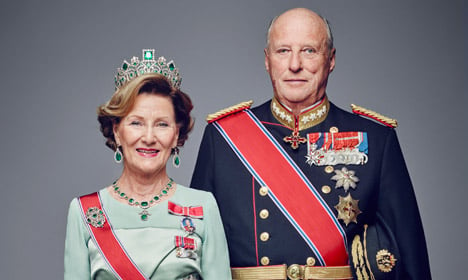 Norway will pay tribute to King Harald and Queen Sonja on Sunday. Photo: Jørgen Gomnæs, Det kongelige hoff
Twenty-five years ago on Sunday, King Olav died following a heart attack and the then Crown Prince Harald took over as Norway’s king.
This event will be marked this weekend with memorial services and numerous activities for young and old.
As per the wishes of the royal couple, the main event will be the winter games at Slottsplassen, giving children the chance to try cross-country skiing, snowboarding, ski jumping, ice slides and a biathlon event with laser guns.
“This will be a celebration in the spirit of the royal family, and it has been wonderful to get a taste of it now that snow has covered Slottsplassen and children are playing out there,” Royal Palace communications manager Marianne Hagen said.
In addition to the winter sports, the weekend will see a number of other activities, the majority of which are free. For those who can’t attend in person, the events will be broadcast live on Sunday by NRK.
Royal guests at the celebrations will include Queen Margrethe of Denmark and Sweden's King Carl Gustaf and Queen Silvia.
Remembering his father

Ahead of Sunday’s anniversary, King Harald spoke to NRK about how he felt when his father, King Olav, died on January 17th, 1991.
“He had been ill for some time. So we were somewhat prepared but you are never truly prepared to lose your father,” a clearly emotional King Harald said on the ‘Konge og dronning i 25 år’ (King and queen for 25 years) programme.
When King Olav died, Harald went from being crown prince to king. On the way from his father’s death bed, a doctor addressed him as “Your Majesty” but King Harald said he didn’t react.
“It wasn’t me!”, he recalled.
King Olav died at 10.20pm on that January night in 1991. He suffered a heart attack while watching news coverage of the Gulf War, which had just broken out.
“He was the first casualty of war, because he had his heart attack while he watched it on TV. He was quite convinced that World War 3 had broken out and he wanted no part in it,” King Harald said.
Harald and his two sisters, Princesses Ragnhild and Astrid, were at their father’s side when he passed away at the Royal Villa.
After his father’s death, the new king held an extraordinary meeting at the Royal Palace to announce that King Olav was dead. The news was then transmitted to broadcaster NRK and news agency NTB. In a special newscast, Harald spoke to the Norwegian people for the first time as king.
“I was incredibly impressed by my father, who managed to make a speech on television that I thought was very warm, genuine and nice,” Crown Prince Haakon said.
After the televised address, King Harald stood and looked out over Slottsplassen as a new phenomenon unfolded: open and shared sorrow. In the days that followed, the square was filled with people who came to light candles and lay flowers in honour of their fallen monarch.
On Sunday, 25 years later, the square will again be filled. But this time it will not be out of sorrow, but rather to commemorate King Harald and Queen Sonja’s quarter century on the throne.