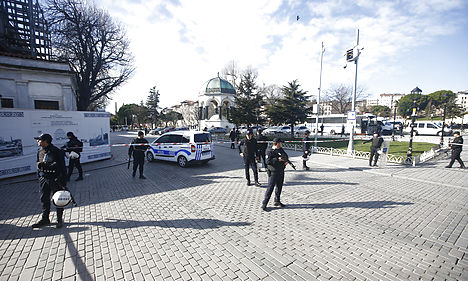 Initial reports from city authorities in Istanbul said that 10 people had been killed and 15 injured in the blast in the Sultanahmet area of the city, one of the busiest destinations for tourists thanks to its many mosques and other cultural sites.

The Norwegian Ministry of Foreign Affairs told news agency NTB that it one Norwegian was injured in the blast.

“We can confirm that one Norwegian was slightly injured and that he is being treated at a Turkish hospital,” ministry spokeswoman Ane Lunde said.

A number of Turkish outlets reported that tourists from Norway, Germany and Asia were among those injured and RT reported that Turkish news agency Dogan said two Norwegians were hurt.

Video from the scene showed large numbers of emergency vehicles arriving, while photos showed bloodied bodies lying on the ground.

Al Jazeera reported that an eyewitness said the attack was a suicide bombing. Turkish officials said there was a link to terrorism.

The blast was large enough to be heard up to a mile away.

I heard loud crash outside my window in Cukurcuma, about a mile away- thought it was something falling due to the strong winds #Sultanahmet

Turkish journalists tweeted soon after the blasts that Germans were among the victims, although there were no figures available immediately.

CNN Turk reported that tourists from Germany, Norway, and East Asia were among those wounded.

German tourists among the dead in Istanbul blast https://t.co/0Q5BVbT6td