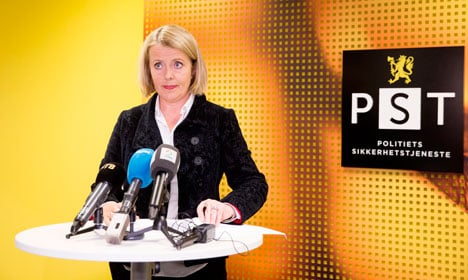 PST head Marie Benedicte Bjørnland, shown at a September press conference. Photo: Håkon Mosvold Larsen / NTB Scanpix
PST head Marie Benedicte Bjørnland warned on Monday of the “unfortunate” consequences that come with large numbers of refugees and migrants from Muslim countries.
“A strong increase in immigration, particularly from Muslim countries, can cause other long-term challenges. When a large number of asylum seekers come to a local community, it can have unfortunate consequences,” Bjørnland said at a security conference in the Swedish ski resort town of Sälen.
“One cannot take for granted that new population groups will automatically adapt the norms and rules of the Norwegian society,” she added.
In an interview with broadcaster TV2, Bjørnland said that large numbers of foreigners can lead to violent clashes and the growth of far-right extremist groups.
“If in the long term, you see a growth of parallel societies, radicalization and extremist environments, then we will have challenges as a security agency,” the PST head said.
Bjørnland spoke in Sweden as the country was dealing with allegations that police withheld information about a string of sexual attacks carried out by Afghan refugees at a Stockholm music festival. The alleged cover-up came to light in the aftermath of sexual attacks in Cologne, which Integration Minister Sylvi Listhaug said she had “no reason to believe” could happen in Norway.