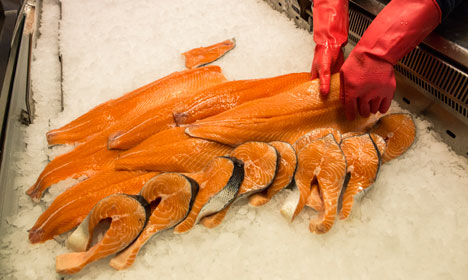 Salmon and trout accounted for a record 50 billion kroner in exports. Photo: Jan-Morten Bjørnbakk / NTB scanpix
Norway's fish exports totalled 74.5 billion kroner (7.75 billion euros, $8.35 billion), more than double the level ten years ago and a rise of eight percent from the record year of 2014, according to the Norwegian Seafood Council.
“In a year with trade restrictions in several markets and an import embargo in Russia, the result was better than expected,” director Terje Martinussen said in a statement.
Russia suspended food imports from most Western countries in August 2014 in retaliation for sanctions the West imposed on Moscow over its role in the Ukraine crisis. Russia had until then been one of the biggest markets for Norwegian fish exports.
China, which froze diplomatic ties with Oslo after the 2010 Nobel Peace Prize was awarded to imprisoned dissident Liu Xiaobo, has also imposed drastic restrictions on Norwegian salmon imports, officially citing veterinary concerns.
But the weaker Norwegian currency, partly caused by plummeting prices for oil, another main Norwegian export, helped compensate for the Chinese and Russian declines.
In volume, Norway's exports decreased by 2.2 percent to 2.6 million tonnes.
Salmon, Norway's star product, and trout, accounted for two-thirds of seafood exports, for a sum of 50 billion kroner which was also a new record.
Two-thirds of exports went to the EU, where Poland, Denmark and France were the main takers.