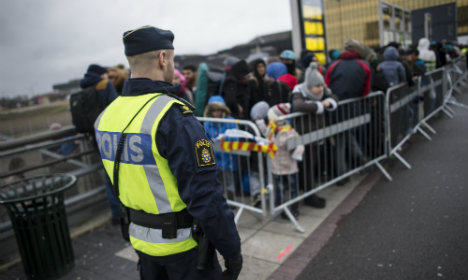 The move is part of a draft law containing a series of immigration measures that the Oslo government says will make its asylum policy “one of Europe's toughest”.

The conservative minority last month gathered enough parliamentary support from the centre and labour parties to adopt the measures.

Norway does not belong to the EU but it is, like Sweden, a member of the Schengen area which has no passport or immigration controls.

According to Schengen rules, asylum seekers must apply for a visa in the country they first arrive in, mostly Italy and Greece. But many instead move on to the country they want to eventually settle in, often in Europe's richer north.

Most of the 30,000 people asking for asylum in Norway this year have crossed the border from Sweden.

“Norway is choosing an isolated policy, by refusing to see that if every country in the Schengen area blocked refugees the same way, they would all get stuck in Greece and Italy,” Pal Nesse, senior advisor for the Norwegian Refugee Council, told AFP. But Norway's Immigration Minister Sylvi Listhaug said the new law would actually improve the lives of legal immigrants.

“We will have an asylum policy that will be among the toughest in Europe,”she told the NTB news agency. “And that is completely necessary so that we can welcome those who come here, settle them in and integrate them.”

The new law also calls for welfare payments for asylum seekers to be below those for Norwegian residents in order to make the country less attractive; the expulsion of unsuccessful applicants; restrictions on long-term residency permits and tougher rules on family members joining successful asylum applicants.