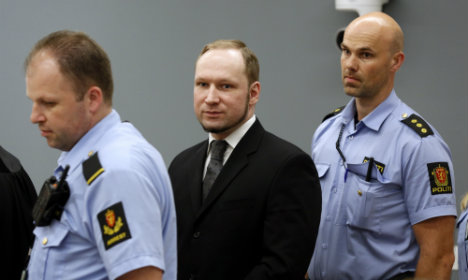 The proposal to hold the case at the prison was made by the State on the basis that 'normal' legal proceedings would not be possible at the Oslo Courthouse, and has been accepted by Breivik's defence lawyer Øystein Storrvik.

Breivik killed 77 people in a double shooting rampage in Oslo and on the island of Utøya on July 22nd, 2011.

The right-wing extremist cited opposition to Norway's multiculturalism as his motivation and frequently gave fascist salutes during his original trial in 2012, which was carried out under exceptional levels of security.

“We have agreed to the [State's] proposal on the basis that it has been set forth, since it seems to be the most realistic option for carrying out a normal trial,” Storrvik told NRK.

Previous suggestions for the trial had included Breivik giving evidence via a video link, an option subsequently ruled out.

”Our main point is that the judge meets him and that the conditions of his imprisonment are in focus – not the protests in Oslo,” said Storrvik.

The state's wish for the trial to be held outside of Oslo is based on both security and cost-related reasons, according to the NRK report, which states that a four-day long trial in Oslo would cost Norway 1.8 million kroner, with several dozen service personnel required in and around the courthouse.

Marianne Vollan, director of the Norwegian Correctional Service, declined to comment on the State's reasons for requesting that the trial be held at Skien prison, but confirmed to NRK that that state advocate had forwarded its request to the Tingrett (District Court).

Breivik's case accusing the state of human rights violations includes claims that the prisoner, who is incarcerated in a high security unit, is denied sufficient contact with other people and freedom of movement.

He also accuses the prison service of censoring his correspondence, concluding that his prison conditions “constitute torture”.

The Oslo District Court will take the final decision on where the trial will take place.