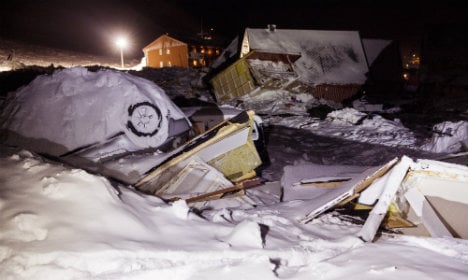 “The child died during the day,” a spokeswoman of the regional university hospital told the NTB news agency, without stating the child's age or gender.

A 42-year-old man also died in the disaster, which struck at around 11am (1000 GMT) on Saturday in the foothills of Mount Sukkertoppen overlooking Longyearbyen, the archipelago's remote capital where coal mining families and polar bears live side by side.

Another eight people including another child were injured on Saturday as the avalanche buried  around 10 of the brightly-coloured wooden houses that are typical of the archipelago. Witnesses said the snow had shifted some houses about 20 metres.

Longyearbyen is the world's most northerly town, situated about half-way between continental Norway and the North Pole.

A spokesman for the rescue services had previously said that four adults and two children were hospitalised but that their injuries were not life threatening.

One resident, Kine Bakkeli, told NRK public television that she had managed to escape through a window. “It's complete chaos here,” she said.

Rescuers, police and residents using spades raced to clear houses buried under a thick layer of snow in the hope of finding the missing. It was not known how many people were missing.

Emergency accommodation has been set up in a youth centre and the town's church.

Weather conditions have been harsh since Friday with authorities warning people to take care in high winds.