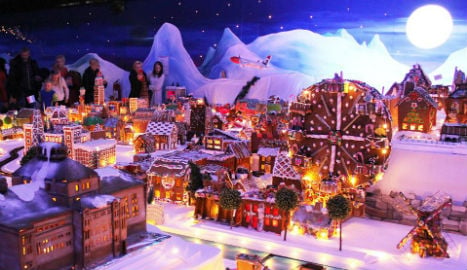 Bergen's Pepperkakebyen contained too much plastic to win the Guinness World Record. Photo: Pepperkakebyen
The refusal is the latest episode in a bitter battle between Bergen, which has built a huge gingerbread town every Christmas for  25 years, and its upstart rival, Gingerbread Lane in New York.
Bergen's display is without doubt the largest gingerbread town in the world, with kindergartens, schools, businesses and thousands of individuals contributing gingerbread art each year.
There are more than 2,000 individual buildings, ships, cars and train made out of gingerbread featured in the exhibition.
But despite its size, 'Pepperkakebyen' as the display is called, has been beaten to the record by New York's Gingerbread Lane, which has just 1,020 gingerbread structures, because some of its contributors included non-edible components.
“For example, we have electrical trains made out of plastic that cannot be eaten,” the 'major' of Bergen's Gingerbread city Steinar Kristoffersen told Norway's NRK broadcaster.  “We also use some ingredients that are not really good for you.”
Last year, Jon Lovitch, the head of New York's Gingerbread Lane, expressed his anger at Pepperkakebyen's refusal to stop calling itself the “world’s biggest gingerbread town”, even though his own creation had been awarded the Guinness record.
“They’re liars,” he told the Washington Post. “There’s an incredible amount of sour grapes over there in Europe, but in Norway to be specific. They act like they own Christmas and they called me the Yankee who stole the record.”
But this year Lovitch appears to have buried the hatchet.
“If Guinness changes the rules, I will most likely lose because this is pretty big,” he told NRK. “But as it is now, I just want to enjoy the moment.”