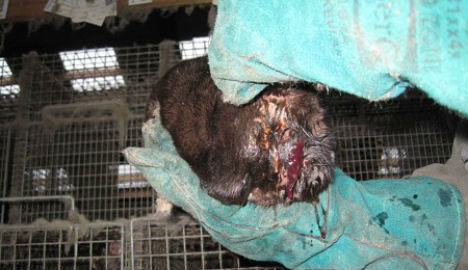 Several mink at the farm had deep untreated wounds. Photo: FSA
On October 20, they raided the farm, taking harrowing photographs of the condition of the animals.
In addition, they discovered that the machinery the man used to gas the animals before removing their skins did not kill them instantly, as intended, but left them writhing in agony for three minutes or more.
According to the FSA report, obtained by Norway’s state brodcaster NRK, the animals were “lifted up by the neck and practically slung down into the execution chamber. Animals were continuously put into the chamber without checking that the those who were already there were dead.”
The FSA this month ordered the farmer to euthanise several of the animals, because they were so sickly its inspectors felt it was better to put them out of their suffering.
“This is fortunately not common,” said Nina Laache, the local head of the FSA in Østfold, where the farm is located.
“We have followed this farm since 2013 and have passed many resolutions. Over time we have noticed no change in either the attitude of the breeder, or of how animals are treated.”
According to the report, when the inspectors witnessed the suffering the man was inflicting by his faulty use of the execution chamber, they tried to stop him.
At this point he became hostile and asked them to leave in a threatening way.  They returned the following day accompanied by police.
See the pictures of some of the wounded and sickly animals below: