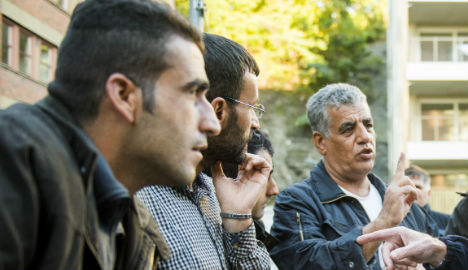 Refugees waiting outside the Police Immigration Unit (PU) in Tøyen, Oslo. File photo: Fredrik Varfjell / NTB scanpix
According to Norway’s VG newspaper, Norway’s Police Security Service (PST) has received hundreds of tip offs from immigration officers about asylum seekers with potential terror sympathies.
“We have received a three-figure number of reports of concern from the Police Immigration Unit, from employees of PU, from UDI and from asylum centres,”  Erik Haugland, a PST section chief told VG. “Our job is to evaluate these messages.”
According to Haugland, this autumn’s surge in refugee numbers so overwhelmed Norway’s Police Immigration Service (PU) that they could no longer properly vet asylum seekers, meaning as many as 13,000 of the new arrivals only received cursory checks.
PST has established a special unit to follow up some of the grim findings found on asylum seekers’ phones and tablet computers.
According to the paper, these include:
Haugland stressed that the vast majority of asylum seekers coming to Norway did not pose a security risk and the fact that a person had these images or videos saved on their phone did not automatically prove that they had terrorist links.
“There may be several reasons why you have such images,” he said. “You might want to bear witness or have a desire to show what you’ve seen, or it might have been tactical to have symbols associated with the organisations that control the areas that you are passing through.
“What looks alarming might have other explanations apart from support for terrorist organisations.”
He said that of the hundreds of cases PST had handled only a handful of new arrivals still raised concerns after they had been investigated.
Url copied to clipboard!