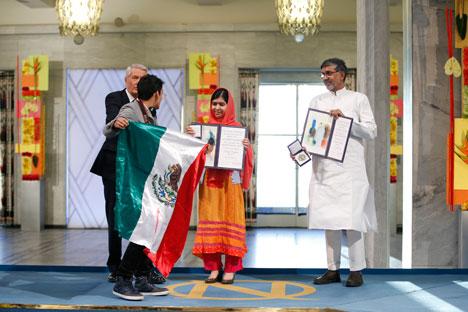 An activist made it all the way up to last year's recipients, prompting police to change tactics this year. Photo: Cornelius Poppe / NTB scanpix
Mexican activist Adán Cortés Salas last year managed to get into the Nobel Prize ceremony without having shown an ID, ticket or accreditation to the event. He made it all the way up to the stage with Peace Prize laureates Malala Yousafzai and Kailash Satyarthi.
“We cannot tolerate the type of mistake that was made last year. We have done everything possible to avoid it, but when people are involved there is never a guarantee of anything,” Oslo Police Section Chief Johan Fredriksen told NTB.
Rigid routines
Last year’s incident was attributed to human error.
“The activist presumably came unnoticed through the administrative ticket control without having a ticket. After that was the security checkpoint, which didn’t require ID or a ticket. This year, we will have rigid routines to control access with double ticket controls that will mean that everyone will need to show their ticket at the security checkpoint as well. And it will not be possible to avoid,” Fredriksen said.
See also: Police sorry for 'security breach' at Nobel awards
Despite the increased concerns about terrorism after the recent attacks in Paris, the threat assessment for the Nobel Peace Prize events in Oslo is not very high, neither for the award ceremony on December 10th nor the concert the following evening.
“Politiets sikkerhetstjeneste [the Norwegian Police Security Service – PST, ed.] conducts an overall safety assessment of the Nobel Prize event based on an assessment of the general terror threat level and an assessment of threats directly aimed at the event. A separate assessment of possible threats aimed at the year’s winners is also involved. This is reviewed by the Police Directorate, which together with PST proposes measures for the event which are then carried out by the police,” Fredriksen said.
Open and vulnerable
Norway values and protects the rights to move about and speak freely, which can present some challenges.
“There is a lot of vulnerability in an open society – in connection with the Nobel Peace Prize ceremony, for example, there will be torchlight processions and demonstrations. One cannot take these kinds of things lightly in this day and age even if we do not have any information of specific threats aimed at them,” Fredriksen said.
See also: Nobel winners to get a 'fair trade' medal each
“Because of the size of the crowds and all of the attention that is directed toward the Nobel Prize, we always have high security,” he added.
What specifically are you doing this year?
“We won’t go in to the specific details. That’s not meant to be stubborn, but it’s just professional. There will be limits to the openness. We will change the routines at city hall and will set up roadblocks, fences and do some other things differently so as not to be predictable.
For the police, it is important to be present and have a high security level without dominating the city.
“This is after all a peace prize, so we need to facilitate a good experience and a successful event by being both discreet and visible,” Fredriksen said.