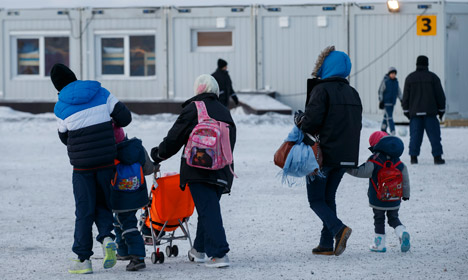 The asylum seekers returned from Russia will be sent back again. Photo: Cornelius Poppe / NTB scanpix
Asylum seekers whom Norway has expelled to Russia are being sent back to Norway in violation of a bilateral agreement between the two countries, Oslo said on Sunday.
“It is our opinion that Russia is obligated to take back those people whom we are sending back to Russia,” Joran Kallmyr, a state secretary in the justice ministry, told AFP.
Kallmyr would not disclose how many asylum seekers were concerned.
Since the start of the year, at least 4,000 asylum seekers have made a long detour through the Arctic to cross the border between Russia and Norway, which is a member of the Schengen agreement on free movement even though it is not a member of the European Union.
See also: Freedom is a bike for migrants at Arctic border
By comparison, only ten asylum seekers made the crossing last year.
Norway has received no “satisfactory” explanation from Russia about why the numbers have soared for those coming into Norway, while at the same time, neighbouring Finland, which is a member of the EU but not of Nato, has received almost no migrants via Russia.
Norway last week announced it would begin sending back to Russia those asylum seekers who have Russian residency permits without processing their asylum requests, arguing that Russia was a safe country for them.
See also: Norway to clamp down on asylum 'misuse'
Kallmyr would not disclose whether the asylum seekers now being sent back to Norway had Russian residency permits.
“We will continue our dialogue with the Russian government and hopefully we will find a common understanding,” Kallmyr said.
Those arriving back in Norway were being placed in police custody and would be sent back to Russia again, he added.