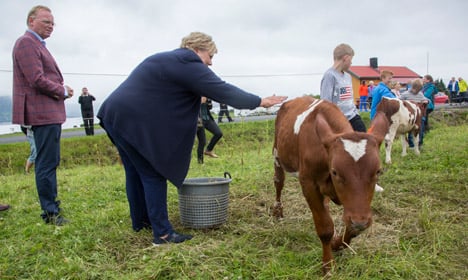 PM Erna Solberg (presumambly holding her breath) visits a cow in Holand. Photo: Jan-Morten Bjørnbakk / NTB Scanpix
Ahead of the COP21 climate talks in Paris, Norwegian PM Erna Solberg said that one of the best ways her country can cut emissions is to target agriculture, including cow farts.
“It is such that Norwegian cows fart too much, so to speak. Transport and agriculture are the largest areas outside of the quota-obliged sectors. We must make cuts that make a difference here at home. We must prepare ourselves for brining emissions in these sectors down significantly,” Solberg told VG, which reported that transport accounts for 32 percent of Norway’s emissions while agriculture accounts for nine percent.
Solberg’s cow fart comments led to some chuckles in the Norwegian media, but the national association of farmers and small-holders (Norsk Bonde og Småbrukarlag) found them no laughing matter.
“That is a putrid distraction and Erna has a total lack of knowledge,” the association’s head, Ann Merete Furuberg, told VG.
“For tens of thousands, perhaps millions of years, we have had ruminants on Earth. If their emissions are so dangerous, surely it would have led to catastrophe already,” she said.
“This is not about innocent animals farting, it is about us burning oil for production and transport. Oil is the true climate challenge,” she added.
Odd Magne Harstad, a professor of animal sciences at the Norwegian University of Life Sciences, agreed that the PM’s focus on cow farts stunk.
“Of the methane gas that comes from cows, it is just three percent that comes from their farts. Most of it is breathed or burped out,” he told VG.