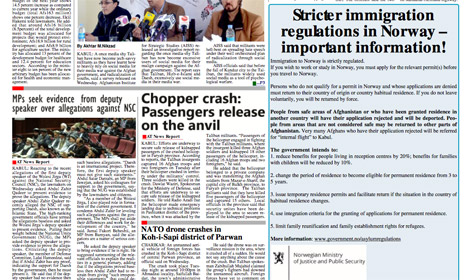 The ad has seen in the Afghanistan Times.
Following in the footsteps of Scandinavian neighbour Denmark, Norway has published advertisements in foreign newspapers to discourage refugees and asylum seekers.
The Norwegian government placed ads in Afghanistan newspapers warning that “immigration to Norway is strictly regulated”.
“Persons who do not qualify for a permit in Norway and whose applications are denied must return tot heir country of origin or country habitual residence. If you do not leave voluntarily, you will be returned by force,” the ad, placed by the Norwegian Ministry of Justice and Public Security, reads.
The ads appeared on the front page of the English-language Afghanistan Times and the Dari-language Hasht-e-sub. The ad appeared in the Monday through Thursday editions of both newspapers and will also be published in Friday’s edition of the latter.

The ad makes it clear that Afghans are unlikely to achieve refugee status in Norway.
“People from safe areas of Afghanistan or who have been granted residence in another country will have their application rejected and will be deported. People from areas that are not considered safe may be returned to other parts of Afghanistan,” it reads.
The ad then details recent changes to asylum policy, including the cutting of benefits for people in refugee reception centres, the issuing of temporary residence permits and limits on family reunification.
Justice Minister Anders Anundsen told Aftenposten that the ads were meant to combat “misperceptions”.
“It is often a challenge that people base their travel plans upon misperceptions of a country’s asylum policies. There are many people who believe, for example, that they can travel to Norway and create a new life,” he said.
In addition to the newspaper ads, the Norwegian government also launched a Facebook page earlier this month to convey the country’s “stricter asylum regulations”.
The new campaign is similar to one published by the Danish government in Lebanese newspapers. Those ads received extensive international attention and led to not one but two counter ads from pro-refugee groups.
Germany also recently launched a campaign in Afghanistan to tell its nationals to think carefully before embarking on the tough journey to seek asylum in Europe,