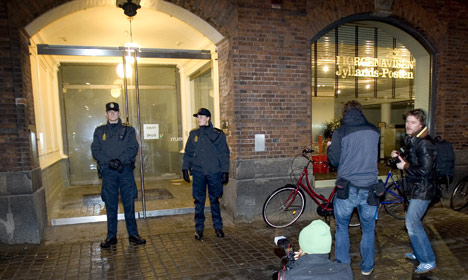 The foiled plan hatched in Norway is one of many to target Danish newspaper Jyllands-Posten. Photo: Keld Navntoft / SCANPIX DANMARK
Abid Naseer, a 29-year-old Pakistani who was extradited from the UK to the US, was given a 40-year prison sentence in a federal court in New York on Tuesday for terrorist plots in several countries, including one targeting Denmark that was planned in Norway. Prosecutors had hoped for a life sentence.
American officials said that Naseer was involved in a plot to target the Copenhagen offices of Jyllands-Posten newspaper, which sparked deadly protests in the Muslim world with its publication of caricatures of Mohammed.
See also: Mohammed cartoons: a decade of controversy
According to US prosecutors, Naseer had connections to the three men who were arrested in Norway in July 2010 on charges that they plotted to bomb the newspaper's office. Two men were found guilty of the plot and Norwegian national Mikael Davud, a member of China's Uighur minority considered the mastermind of the plot, was given eight years behind bars. Shawan Sadek Saeed Bujak, an Iraqi Kurd residing in Norway, was given a three-and-a-half-year term while the court failed to come to a decision over the guilt of a third man.
See also: Norway court ups sentence in cartoon case
Naseer is said to have been in regular contact with an al-Qaeda operative who was involved in the Norway planning.
UK officials arrested Naseer and 11 other men in 2009 for planning an attack on a Manchester shopping mall and US authorities said he also had plans to attack the New York City subway system.
A search of a Manchester Internet cafe frequented by Naseer revealed exchanges with an Al-Qaeda handler and downloaded jihadi anthems which called for “death in large numbers.” According to the BBC, the men were ordered to leave the UK but Naseer was allowed to stay after a judge ruled that he would not be safe in his native Pakistan.
In 2010, US prosecutors requested that the UK arrest him again on the suspicion that he was involved in plans to attack the New York subway system and Jyllands-Posten – plots that the US Justice Department said were “directed by and co-ordinated with senior al-Qaeda leaders in Pakistan”.
Naseer's was one of many foiled terror plots to have targeted Jyllands-Posten since the newspaper published 12 cartoons depicting the prophet Muhammad in September 2005, which caused angry and sometimes deadly protests worldwide.
See also: Danish Mohammed cartoonist has no regrets
Kurt Westergaard, the artist behind the most controversial of the 12 cartoons, was targeted in a failed murder attempt at his home in 2010 and American-born terrorist David Headley was behind a 2009 plot to storm the newspaper's offices and behead journalists.
Url copied to clipboard!