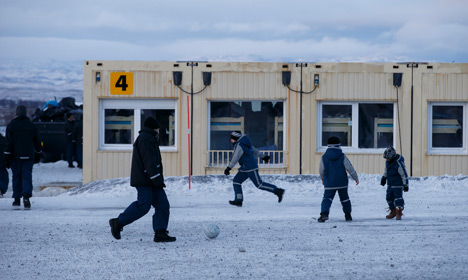 67 percent of Norwegians do not want to see refugee numbers increase. Photo: Cornelius Poppe / NTB scanpix
In a matter of just five months, Norwegians appear to have largely reversed their outlook on accepting refugees. In a poll conducted by Ipsos MMI and published on Saturday, 42 percent of respondents said that Norway should accept fewer refugees, 25 percent said the numbers shouldn’t raise from the current level and 28 percent thought the Nordic country should take in more refugees.
A similar poll carried out in June showed nearly the opposite, with 42 percent advocating for more refugees and 31 percent saying there should be fewer let in to Norway.
PM Erna Solberg told Dagbladet that she is in agreement with the Norwegians that there are too many refugees currently seeking out the country.
“It is important that we try to limit the number of groundless asylum applications. It is in the best interests of Norwegian society, the ability to successfully integrate and for those people who have a genuine need for protection,” she said.
The opinion poll comes after Norway’s parliament on Thursday agreed to asylum reforms that the deputy leader of the anti-immigration Progress Party hailed as “the strictest” in Europe, along with Denmark.
See also: Norway tightens asylum policy to cut numbers
Under the deal, the government will reduce asylum seekers' social benefits, putting them on a par with levels in neighbouring Nordic countries to make Norway less attractive, and speed up the processing of some cases and the expulsion of rejected asylum seekers.
It will also limit access to permanent residency, and make it harder to qualify for family reunifications.
Norway, a member of the Schengen area of free movement even though it is not a member of the European Union, has also increasingly used media channels to discourage new arrivals, in particular the growing number of migrants arriving via the Arctic route across northern Russia.
See also: Record numbers cross Norway's Russian border
Solberg said she has consistently pushed for policies that will result in fewer asylum seekers.
“I haven’t been in a competition on who can take in the most refugees. I have been very clear that invitational signals would be a challenge for Norway as a nation and therefore I have been very reserved,” she told Dagbladet.
Since the beginning of the year, 29,000 people have sought asylum in Norway, a country of 5.2 million, including 2,500 people in the past week alone.