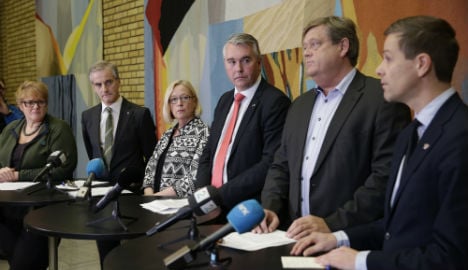 Parliamentary leaders of Norway's political parties after agreeing on asylum. Photo: Vidar Ruud / NTB scanpix
Since the beginning of the year, 29,000 people have sought asylum in the country of 5.2 million, including 2,500 people in the past week alone.
The ruling parties, the Conservatives and the anti-immigration populist Progress Party, reached an agreement with their centrist allies and the Labour opposition, giving them a broad parliamentary majority to limit the number of refugees coming to the Scandinavian country.
Under the deal, the government will reduce asylum seekers' social benefits, putting them on a par with levels in neighbouring Nordic countries to make Norway less attractive, and speed up the processing of some cases and the expulsion of rejected asylum seekers.
It will also limit access to permanent residency, and make it harder to qualify for family reunifications.
Norway, a member of the Schengen area of free movement even though it is not a member of the European Union, has also increasingly used media channels to discourage new arrivals, in particular the growing number of migrants arriving via the Arctic route across northern Russia.
Other Nordic countries have recently announced a similar tightening of their asylum policies.
The Norwegian migration agency said Thursday it would need to find 100,000 beds for new arrivals by the end of 2016.
“The situation is critical in terms of creating asylum places,” its director Frode Forfang said.
Norway has built its prosperity on its lucrative oil and gas reserves, but its economy has been hit hard by falling oil prices and it is struggling to reduce its dependency on hydrocarbons and convert its economy.
Unemployment hit its highest level in 10 years in August, reaching 4.6 percent.