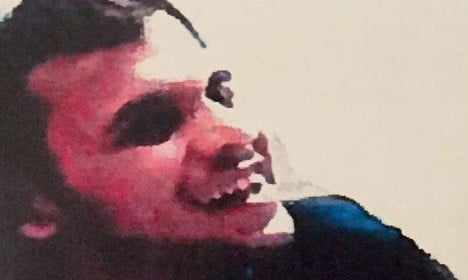 The photo which is being shared across Sweden
Norway’s Police Directorate confirmed on Thursday morning that it had alerted all police districts to keep a look out for Mutar Muthanna Majid, who according to intelligence received by Swedish police, has travelled to Sweden from Iraq or Syria in order to carry out an attack.
“A message has been sent out that we are looking for the man inside the country,” a press spokesman told the country's NTB Newswire. “We have sent on information we received from the Swedish police. It’s natural, as we are Sweden’s neighbouring country.”
Sweden’s intelligence service Säpo on Wednesday put the country on “high” terror alert,  for the first time in its history.
The alert level of four — defined as meaning “the probability that players have the intent and ability to carry out attacks is high” is the second highest possible.
Säpo’s Director General Anders Thornberg told reporters that a man suspected of planning terror attacks had been arrested in absentia.
On Thursday, grainy pictures of Iraqi citizen Mutar Muthanna Majid, which had been circulated to police, were published in the country’s Expressen and Aftonbladet newspapers.
“It was not completely unexpected that the picture would be shared,” Patrik Eriksson from Stockholm Police told the Dagens Nyheter newspaper.
“We are prepared for people starting to phone in tips now. There are pros and cons, but more eyes watching out are undeniably better.”
According to Sweden’s Expressen newspaper the picture was circulated along with a letter explaining that Säpo had information that Majid was planning a terror attack.
“Säpo have become aware that Mutare Muthanna Majid, a member of ISIS, has traveled from Iraq and Syria to Germany, and since then onward to Sweden. He is, according to our information, involved in plans to conduct a terrorist attack in Europe.”
The Danish Security and Intelligence Service (PET) has also joined the search, sending Majid’s photo to police forces across the country.
“PET can confirm that Danish police have received a photo of the wanted man. There is no concrete information on the man’s whereabouts so the Swedish authorities have therefore asked Danish police to be on the lookout,” PET spokeswoman Amalie Mathiesen told broadcaster DR.
The Norwegian Police Security Service (PST) would not comment on what intelligence it had been given by its Swedish counterparts.
In the wake of last Friday's attacks in Paris, the agency this week began reassessing the threat level in Norway.