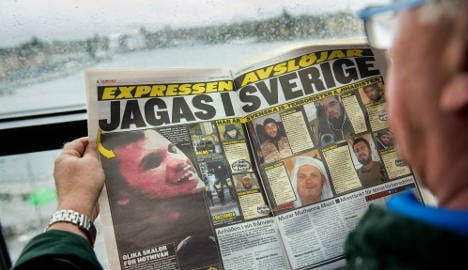 Expressen newspaper printed an image of Mutare Muthanna Majid after receiving a leak of the police photo. Photo: Marcus Ericsson / TT / NTB scanpix
Säpo confirmed in a press statement just before 10pm that it had arrested the man on Thursday afternoon, with the help of local police, although it did not name the location.
Regional newspaper Norran reported huge police activity outside a property in the small town of Boliden in northern Sweden. However, Säpo declined to confirm it was related to the arrest of the terror suspect.
“The arrest took place in a calm manner and an interrogation with the person is planned,” the security service said in a press statement.
Boliden residents told Norran that the police raid had started at 6.30pm. According to Swedish newspaper Dagens Nyheter, it took place at housing for asylum seekers run by the Swedish Migration Agency.
An unnamed witness told the regional newspaper that the man had tried to hide on the balcony, where he was eventually overpowered and arrested by officers.
Norway’s Police Directorate confirmed on Thursday morning that it had alerted all police districts to keep a look out for Mutar Muthanna Majid, after being contacted by Swedish police, who feared the terrorist may attempt to escape across the border.
The Danish Security and Intelligence Service (PET) has also joined the search, sending Majid’s photo to police forces across the country.
Earlier on Thursday a grainy picture of a man believed to be the suspect was shared widely in media across Sweden. Police confirmed to The Local that the same picture had been distributed to officers.