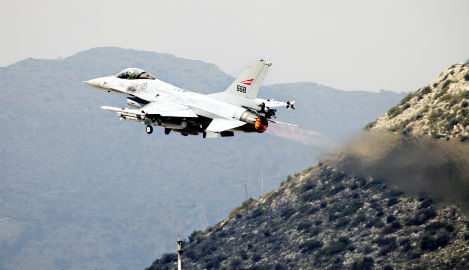 A Norwegian F-16 jet takes off from Souda airport in Crete on the way to an operation in Libya in 2011. Photo: Lars Magne Hovtun / DEFENCE / Scanpix
But, according to Norway’s prime minister, the country will not make a decision on whether to contribute until it is approached by France or the EU.
“We will consider all inquiries we get about it in a proper way,” Erna Solberg told Norway’s NTB newswire. “But I will not speculate about it until we have received some inquiries.”
European foreign policy chief Federica Mogherini announced on Tuesday that European defence ministers had agreed to support France, which has intensified bombing raids against the terror group Isis’s stronghold in Syria and Iraq.
“Today the EU through the voices of all the member states unanimously expressed its strongest full support and readiness to give the assistance needed,” she told a press conference in Brussels with  French defence minister Jean-Yves Le Drian.
“France will be in contact bilaterally in coming hours and days to express the support it requires and the EU will ensure the greatest effectiveness in our common response,” former Italian foreign minister Mogherini added.
Commander Per Christian Gundersen at Norway’s National Defence College, said that Norway had in the past shown itself willing to contribute fighter aircraft.
“Norway may have the capacity to contribute F-16 fighter jets to such a coalition,” he told the Bergens Tidende newspaper, pointing out that the country had sent its fighters to participate in the bombing of Libya.
But Ståle Ulriksen, a researcher at NUPI, said Norway could also send special forces troops such as its elite Marinejegerkommandoen (MSK) or Forsvarets Spesialkommando (FSK) units.
Sweden’s Interior Minister Anders Ygeman confirmed to Swedish news agency TT that his country backed the plea for help, but said that what Sweden could offer would depend on what France requests over the coming.
And despite its opt-out from EU defence cooperation, Denmark has already expressed its readiness to send F-16 jets to make strikes against ISIS targets.
“We have declared that we are ready to send our F-16 jets back into action just as soon as they are militarily deemed ready,” foreign minister Kristian Jensen told the Ritzau news agency.
France’s decision trigger a clause in the EU treaty allowing it to ask for military support is a milestone in the growing importance of the European Union as a military and security alliance, and a shift towards away from Nato.
NATO Secretary General Jens Stoltenberg told Norway’s NTB newswire that France had decided not to activate Article 5, the article that says an attack on one NATO member is an attack on all.
“The most important thing is that all the NATO allies and EU members show full solidarity with France,” Stoltenberg told the newswire.