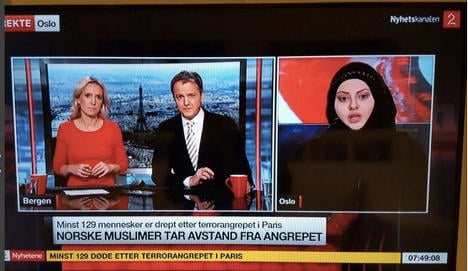 Laial Janet Ayoub, founder of the #jegtaravstand Facebook campaign on TV2. Photo: Instagram
Nooshin Zaery, who runs the NGO Islamsk Dialog i Norge, or Islamic Dialogue in Norway, teamed up the the Alliance Francaise  to organise a vigil in Bergen’s main square on Sunday, drawing a crowd of hundreds.
“I am so sad about what has happened in France and as a Muslim I condemn the attacks,” Zaery told Bergens Avisen on Sunday. “We want to show that Muslims are not dangerous and that we deplore these dreadful acts. We have nothing to do with IS (Islamic State) and terrorists.”
Laial Janet Ayoub on Saturday morning launched a campaign on Facebook encouraging Norwegian Muslims to publicly reject the attacks using the hashtag #jegtaravstand, winning nearly 1000 ‘likes’.
Many of those using the hashtag quoted a verse in the Quran condemning murder.
“If you kill one human unjustly then you have killed all mankind”.
“I think and believe that we have to shout quite loudly now if we want to have a better image for Muslims in Norway,” she told TV2. “I have lived in Norway for 25 years, and during all these years I have had to defend myself every time a terrorist act happens in the name of Islam.”
Munir Ahmad Khan Zartasht, the leader of the Oslo’s Ahmadiyya Muslim Jamaat, a mosque for the largely Pakistani Ahmadiyya Community, sending out a press release on Saturday.
“We as Muslim organization strongly oppose such barbaric acts,” he wrote. “Let it be clear that such terrorist acts that we witnessed yesterday have no religion.”
Url copied to clipboard!