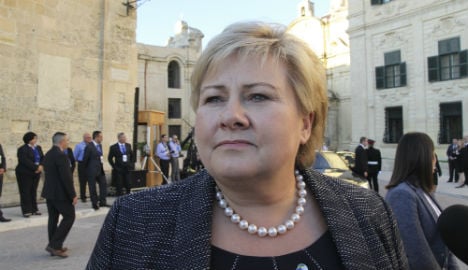 Erna Solberg in Valetta on Thursday. Photo: Anne Marte Vestbakke / NTB scanpix
Norway is not considering following Sweden and imposing temporary border controls, the country’s Prime Minister said on Thursday, as leaders of the eight parties in parliament met to discuss proposals to deal with the refugee crisis.
“We are now considering anything new like that at the present moment,” Prime Minister Erna Solberg said on the sidelines of Thursday’s summit between European Union and African leaders in  Malta.
“We have for the past two month had a border presence which is quite a lot bigger than earlier,” she said. “Whereas Sweden has not have the same level of escalation as we already have had.”
Sweden’s minister for home affairs, Anders Ygeman, told a press conference in Stockholm on Wednesday evening that border controls would take place on the Øresund Bridge that connects Denmark and Sweden, as well as the ferry terminals in southern Sweden.
The Swedish controls took effect at 12pm on Thursday and will initially apply for ten days.
Solberg said that it was possible that Sweden’s decision would mean fewer asylum seekers coming to Norway.
“It is difficult to be completely sure, but it may mean that many of those who are heading towards Norway will be stopped on some of these border crossings,” she said.
Norway’s parliamentary leaders met for two hours on Thursday afternoon to discuss different proposals on how to manage the refugee situation.
“What is important now is to do something about the influx across the border. It has become unmanageable, and it must come to an end,”  Harald Tom Nesvik, parliamentary leader for the Progress Party said.
The Government has made 15 proposals on how to reduce current high arrival numbers and limit future influx, including increasing restrictions on family reunification, increasing the use of temporary residence permits, faster return of persons without a need for asylum, and cuts in benefits.

PARTNER CONTENT
Where are you going this summer? Why Malta is the perfect Mediterranean escape