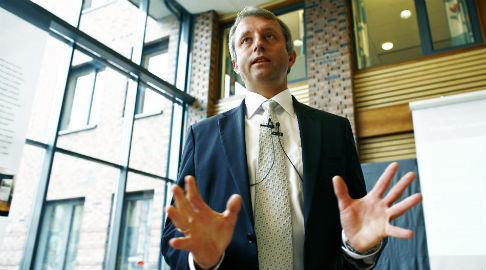 Jo Lunder in 2007 when he was chief executive of Ementor. Photo: Sara Johannessen/SCANPIX
Lunder has been charged by Norway's financial police Økokrim for corruption, in a case linked to the joint US-Dutch investigation into bribes the company is alleged to have given to receive an operating license in Uzbekistan.
“He has been charged in connection to the Vimpelcom case. It is a corruption charge,”  Marianne Djupesland, a public prosecutor at Økokrim, told VG newspaper. “For reasons connected to the investigation, it is not appropriate to reveal details about the contents of the charges.”
Lunder became Vimpelom's chief executive in 2011, long after both the company's launch into Uzbekistan in 2007 and 2009, when it carried out one of the transactions under investigation, buying back a 7 percent stake in its Uzbek mobile firm Unitel from Takilant, a company linked to Gulnara Karimova, the Uzbek president's daughter, for $57.5m.
However, Lunder was on Vimpelcom's board of directors at the time, representing Norwegian telecoms operator Telenor, one of the company's largest shareholders alongside Russian billionaire Mikhail Fridman.
Lunder's lawyer Cato Schiøtz, one of Norway’s corruption law specialists, told the Norwegian national broadcaster NRK, that his client believed he was innocent.
“I talked with him for a couple of days ago. He believes he has had no involvement with any corruption at Vimpelcom,” he said.
Lunder, who before his business career was the captain of Norway's Lyn Football Club, headed Ferd Industrial Holdings from 2007 until he became Vimpelcom's chief executive in 2011.
Vimpelcom refused to comment on the arrest or what it meant for the ongoing investigation.
“The Uzbekistan investigation is ongoing and it is not appropriate for us to comment or speculate on the arrest of Vimpelcom’s former CEO, or the investigation,” the company said. “Vimpelcom continues to cooperate fully with the US and Dutch authorities. The Company is fully committed to compliance across the Group, which is a top priority for its new management team.”
The company said on Tuesday that it had set aside $900 million for potential fines arising from the case, which has been interpreted as a sign it is bracing for sanctions.
The case is making waves in Norway where the government, which holds 54 percent of shares in Telenor, has demanded to see the operator's accounts.
Telenor's chairman Svein Aaser was forced to resign on October 30 after the government accused him of being slow to come forward with information.
The Norwegian telecoms firm has expressed an intention to sell its 33-percent stake in Vimpelcom, but finding a buyer could prove difficult as the Russian provider fights the corruption case.
Telenor's Finnish-Swedish competitor TeliaSonera was previously embroiled in graft claims in Uzbekistan, contributing to its decision in September to quit the Asian, Caucasus and Moldavian markets.