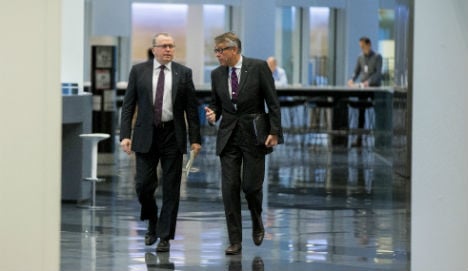 Statoil chief executive Eldar Sætre arriving for the third quarter results press conference on Wednesday. Photo: Vegard Wivestad Grøtt / NTB scanpix
Adjusted net income, Statoil’s preferred metric, fell 59.3 percent year on year to 3.7 billion Norwegian kroner in the three months to September 30th compared to 9.1 billion Norwegian kroner in the same period in 2014, the company announced on Wednesday.
“In the third quarter, our financial results continued to be affected by low liquids prices,” Statoil chief executive Eldar Sætre said in a statement. “I am pleased with the way we are taking costs down, but the continued low prices in the third quarter demonstrates that we must continue to chase further cost efficiencies.”
Including asset impairments, provisions for disputes and other net adjustments, the company narrowed its loss for the period from 4.8 billion kroner to 2.8 billion kroner.
Statoil is unusual among the major oil companies in pushing ahead with a major oil and gas development, the Johan Sverdrup field, despite the tough oil price environment.
In its statement the company said that it was pleased that it had managed to reduce the cost estimates for the project by 7 percent in the plan for development and operation approved by Norway’s Ministry of Petroleum and Energy in August.
Sætre said that the company had succeeded in reducing capital expenditure buy $1 billion to $16.5 billion, but added that its strong cash flow and relatively low net debt ratio of 24 percent gave it flexibility.
“We are progressing our efficiency programs according to the plan we communicated in February, and continue to reduce the underlying operational cost,” he said.
Statoil delivered production of 1,909 mboe per day in the third quarter, up 4 percent compared to the same period in 2014. The underlying production growth, after adjusting for divestments, was 7 percent compared to the third quarter last year.