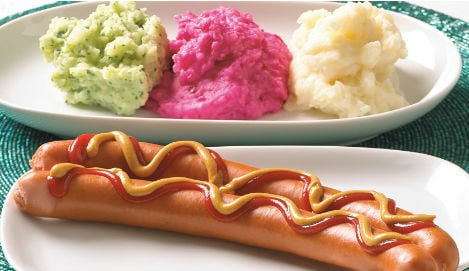 Norwegian pølser hotdogs and multi-coloured mash potato. Photo: Stabburet
But Norway’s Ministry of Health has said it will take a close look at the findings before it decides to put health warnings on packages.
Hotdogs or ‘pølser’ are a national obsession in Norway, with 45 million kilograms of the pork product sold annually — that's 8.8kg per head — but according to the WHO, processed meats such as those used to make the sausages can lead to more serious health risks than previously thought.
The organization’s latest report suggests that having just 50g of processed meat a day – less than two slices of bacon or one hot dog – increases the chance of developing colorectal cancer by 18 percent.
It is the first time that the World Health Organization (WHO) has said that there is “sufficient evidence” to make the link.
“For an individual, the risk of developing colorectal cancer because of their consumption of processed meat remains small, but this risk increases with the amount of meat consumed,” Dr Kurt Straif, Head of the WHO’s International Agency for Research on Cancer’s (IARC) Monographs Programme said in a statement following the report’s release on Monday.
“In view of the large number of people who consume processed meat, the global impact on cancer incidence is of public health importance,” he added.
Norway’s meat consumption has grown rapidly in recent decades from 53kg of red a year in 1989 to 76kg a year  in 2013, according to a report from Norway’s Directorate of Health.
Men eat an average 1,022 grams of meat a week, and women 620 grams, more than double the amount recommended by the Norwegian Directorate of Health.
So it’s perhaps no surprise that Norway has the highest rate of bowel cancer in Europe, with 3,500 cases every year, according to the country’s National Cancer Registry.
But Cecilie Brein-Karlsen, a Secretary of State at Norway’s Ministry of Health said it would important not to rush into taking decisions.
“It is important to monitor research in this area. We have not read the report yet, therefore it is difficult to comment on its contents,” she told NRK.
The IARC Working Group considered more than 800 studies that investigated associations of more than a dozen types of cancer with the consumption of red meat or processed meat in many countries and populations with diverse diets.
It concluded that there was also “limited evidence” to suggest that the consumption of red meat could cause colorectal, pancreatic and prostate cancer, but said that more research needed to be done in this area.
Dag Henning Reksnes, the director of Norway’s Information Office for Eggs and Meat, which is funded by the animal farming industry, played down the report’s findings.
“There is little new here compared to what’s already in Norwegian dietary advice, namely to reduce the intake of processed meat and eat mostly lean meat,” he said.
Url copied to clipboard!