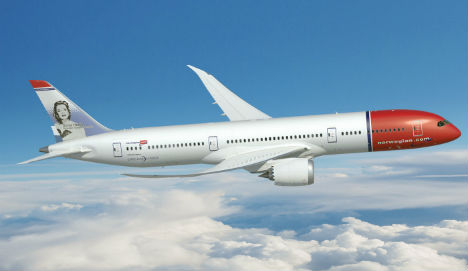 Based on the catalogue price, the planes would be worth around $4.7 billion, but aircraft manufacturers usually offer special deals on large orders like this.

The new orders will bring the carrier's number of Dreamliners to 38 by 2020. Norwegian also signed an option for another 10 planes, it said.

One of the few low-cost carriers to venture into long haul distances, Norwegian is turning a profit in the segment and plans to launch new routes “worldwide”.

“After two years of operating low cost long haul flights, our load factors have averaged over 90 percent, which proves the demand for affordable flights between Europe and the US and Europe and Asia,” Norwegian's chief executive officer Bjørn Kjos said in a statement.

Other low cost companies are trying to break into the long haul segment, but are having trouble acquiring modern, energy efficient aircraft such as Boeing's Dreamliner and Airbus' A350.

Norwegian currently has eight Dreamliners in operation and is awaiting 11 others from previous orders.

The airline meanwhile announced a third quarter net profit of 832.8 million kroner (90 million euros, $102 million), more than double from the same period a year ago thanks to “the positive impact” of its long haul operations and international routes.

Deliveries of the new Dreamliners will begin in 2017. The planes will be owned by Arctic Aviation Assets, a subsidiary of Norwegian.

Norwegian's share price was down by 8.03 percent in early morning trading on the Oslo stock exchange, due to lower than expected earnings.