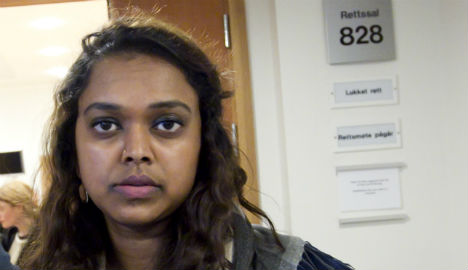 Khamshajiny Gunaratnam at the trial of Anders Behring Breivik in 2012. Photo: Heiko Junge / Scanpix
Khamshajiny Gunaratnam —  who styles herself “Kamzy” — was born in Sri Lanka and moved to Norway when she was three years old.
She will be formally elected at a meeting of the city’s new council on Wednesday.
She will serve under the city’s new mayor Marianne Borgen, a longstanding politician for the Socialist Left party.
Borgen’s appointment ended hopes that the city could see its first Muslim mayor, after the Green Party’s candidate Shoaib Sultan became sidelined in the Labour Party’s coalition deal.
Gunaratnam was 23 years old when Norwegian terrorist Anders Behring Breivik attacked the Labour party summer camp she was attending on the island of Utøya in 2011.
“It was for me the safest place in the world,” she told the New York Times after the event.
She told the Financial Times how she decided to try to swim to land from the island, despite seeing many turning back in exhaustion.
“Eventually, I decided I would rather drown than be shot,” she said.