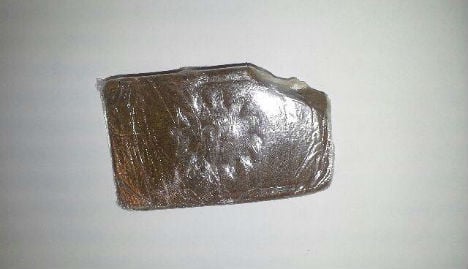 The cannabis has a street value of about 900 kroner. Photo: Norwegian Police
“The evidence suggests that a customer had been unfortunate and mislaid their goods during a visit,” the Hitra and Frøya police announced in a tongue-in-cheek message posted under a photograph of a large chunk of cannabis wrapped in clingfilm.
“It turned out to be about 90 grams of hashish with a street value of about 9,000 Norwegian kroner. This is quite a lot of money, so we recommend that the person who lost their hash comes in to the local station.”
The post has been shared more than a thousand times on Facebook, and viewed more than 10,000 times.

“Police start making silly jokes after discovering stash of hash. Is this a coincidence? jokes one poster, before pointing out that someone has already made their way through a significant part of the brick. “Take a look at the top right-hand corner of the hash”.
“Is it possible to collect it anonymously,” asks another. “Asking for a friend.”
Joking aside, Norway has relatively strict rules on cannabis use, with amounts over 15g punishable by up to two years in prison, if the holder is shown to be a dealer or a repeat offender.