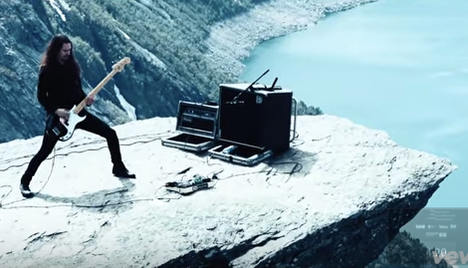 Shining's bassist looks perilously close to the edge. Photo: Shining
Trolltunga juts out over a 700m drop down into the Ringedalsvatnet lake near the town of Odda, some 200km outside Bergen.
“Everyone in the band was obviously afraid of heights, but no one panicked,” Jørgen Munkeby, the band’s frontman and singer told Norway’s NRK channel back in June. “When we started playing, we thought nothing more of the height.”
The video, for the band’s new release, Last Day, starts with drone-shot footage that takes you careering over snow-covered mountains before swooping down on the band thrashing their instruments like maniacs, a 700m drop beneath them.
The band, who are currently on a European tour, were flown up to Trolltunga by helicopter.
“Both financially and technically, the concert was challenging to implement,” said AK Glück-Teigland, the cultural promoter who had the idea for the concert. “But with a lot of positive support, we managed to do the impossible.”