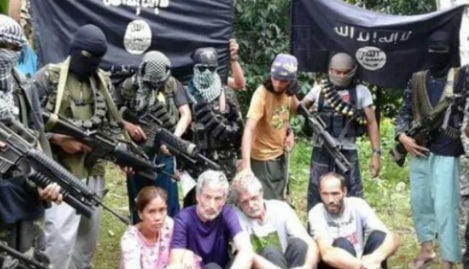 This image of the four hostages was posted on an Islamist Twitter account on Tuesday. Photo: Screen Grab
The video, posted on YouTube on Monday, shows Sekkingstad, 56, together with the three other hostages, John Ridsdel, 68, and Robert Hall, 50, and Hall's girlfriend, Marites Flor.
In the video the three men appeal to the Philippine authorities to halt military assaults against the gunmen. The photos show the four hostages alongside their captors.
Gunmen raided a luxury marina near the major southern city of Davao on September 21, abducting the Norwegian owner of the resort, two Canadian tourists and one of their girlfriends.
No group immediately claimed responsibility but the video uploaded on YouTube on Monday appeared to confirm it was the Abu Sayyaf, which has a long history of kidnappings-for-ransom in the southern Philippines.
Rune Båstad, a spokesman for Norway's foreign ministry, said that they were coordinating with other countries about how to handle the ransom demands.
“We are constantly working on this matter, and have an ongoing dialogue with Philippine and Canadian authorities on the matter,”  he told NRK.
In the video, the three foreigners appealed for Philippine authorities to halt military assaults against the gunmen.
The hostages were sitting on the ground, surrounded by at least eight men holding high-powered machine guns. One man also holds a large knife.
After the three foreigners spoke, one of the gunmen, with a scarf and sunglasses completely covering his face, spoke in English, repeating his demand for military operations to stop against “us”.
He said once the military operations stopped, the kidnappers would be prepared to start negotiations for the hostages' freedom.
In all other Abu Sayyaf kidnappings of foreigners, the group has demanded and often received large sums of money for the release of its captives.
Philippine authorities had previously said they did not know if the Abu Sayyaf was behind the abductions, nor where the hostages were being held.
This was despite security analysts saying it was almost certain the Abu Sayyaf was responsible, and that the victims were being held on Jolo island, the group's stronghold about 1,000 kilometres (600 miles) south of Manila.
In the video, Ridsdel referred specifically to nearby artillery fire and to overhead flights.
When asked to comment on the demands, the regional military spokesman for the area, Captain Antonio Bulao, told AFP troops had conducted an assault that included artillery fire against an Abu Sayyaf leader on Jolo on October 8.
Bulao, spokesman for the Western Mindanao command, said the assault was aimed at Radullan Sahiron, who is on the US government's list of most wanted “terrorists”.
Sahiron was involved in the kidnappings of three Americans in 2001 from a resort in the southwestern Philippines, according to a US government website, which offers a $1 million reward for bringing him to justice. One of the Americans was beheaded.
Bulao said Sahiron was believed to be currently holding a Dutch birdwatcher kidnapped from a southern Philippine island in 2012, as well as two unnamed Filipinos.
The Abu Sayyaf is holding three other foreigners, a Korean and two Malaysians, military officials told AFP earlier. An Abu Sayyaf leader appeared online last year pledging allegiance to Islamic State.
But Philippine authorities and security analysts say the group has little religious ideology, and is primarily concerned with getting money through kidnappings.
NORWEGIAN
Airline Norwegian gets seven-fold increase in passengers over Christmas