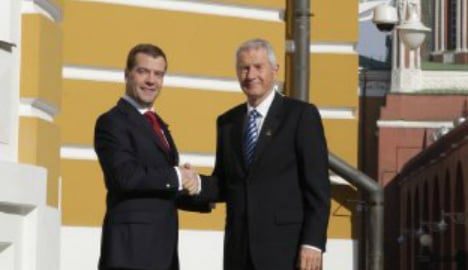 Thorbjørn Jagland meets with then Russian President Dmitry Medvedev in 2010. Photo: Thorbjørn Jagland/Facebook
Øivind Stenersen, author of the book Nobel: 100 years of Peace, said that Jagland’s other role, as Secretary General of the Council of Europe, had effectively put giving the prize to Russian opposition activists out of bounds.
“I think the possibility of giving a prize to the opposition in Russia will be better now,” he said of Jagland’s shock demotion in March this year, and his replacement by former Conservative MP Kaci Kullman Five.
“It provides a chance to give a prize to the opposition in Russia. Before if a prize was given it would have been problematic for him to maintain a good relation with Russia in the Council of Europe.”
This year’s prize comes at a time of intense intrigue and turmoil surrounding the committee, starting with the ousting of Jagland in March, following a tenure which saw controversial awards to Barack Obama, Chinese dissident Liu Xiaobo, and Barack Obama.
Last month, Geir Lundestad, who served as the highly influential secretary to the Norwegian Nobel Committee for 25 years until 2015, published a book Secretary of Peace, which argued that the 2009 prize to US President Barack Obama had been a mistake, and included strong criticism of several of the committee’s chairs.
Thorbjørn Jagland was highly critical of Lundestad for airing his opinions so openly.
“I am not sure it strengthens the reputation when he writes that the current leader is weak, the previous one (Jagland himself) was actually a fool and the one before hadn’t a clue about foreign policy,” he said on Norwegian Television.
Stenersen said that he believed that Five was a “good choice”.
“She’s an experienced politician, she’s not too strong, and is very rational and will listen to all the arguments. She is a very good choice.”
He said that he did not expect Lundestad’s replacement as Director to be as influential.
Many journalists say that Geir Lundestad had too much power in the committee, and tried to influence the committee too much,” he said. “The new secretary will have another style, not too dominant.”
He said that this year’s prize appeared to have had fewer leaks than has been the norm in the run-up to previous prizes.
Url copied to clipboard!