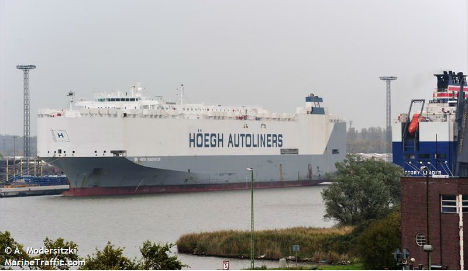 The raid was conducted by an elite division of the Kenyan police because of a tip off from US intelligence, informing Kenyan authorities that the ship Høegh Transporter on route from Mumbai in India may be carrying weapons and drugs.

“FBI intelligence reports indicate the drugs were stuffed into the ship in Mumbai and were destined for Mombasa,” an officer working with DEA agents told Kenya's The Star newspaper.

“Arrival of the agents indicates they have the latest intelligence on drugs syndicates and are soon likely to make major arrests and seizure,” the officer said.

Police have also reported that a white powder was found hidden on board, although the substance has yet to be tested to determine if it is an illegal drug.

Should the white powder be narcotics, there is a high chance that Kenyan authorities will sink the ship, owned by Norwegian Høegh Autoliners by blowing it up.

It is the Kenyan government's policy to blow up any ship found to be carrying drugs in its waters. The first time a ship found to be trafficking drugs was blown up in August last year, Kenya's president Uhuru Kenyatta witnessed the explosion from a helicopter.

Høegh Transporter is a 200-meter vehicle carrier, built in 1999. When it arrived in Mombasa, it was carrying among other cars, vehicles for UN military operations in East Africa.

President Kenyatta now faces a a dilemma of whether or not to destroy Høegh Transporter, a vessel of considerable value should the white powder turn out to be illegal drugs.

Mombasa County Commissioner Nelson Marwa is convinced that the president will continue with the policy.

“Whatever happened to the others will befall this one,” he told Kenyan newspaper Daily Nation.

Høegh Autoliners is sure that their ship will soon be on its way.

“We cannot speculate on the ongoing operation and cannot comment on rumours associated with the search,” they said in a press release.

“We look forward to the speedy completion of the search so that our vessel can resume her sailing schedule.