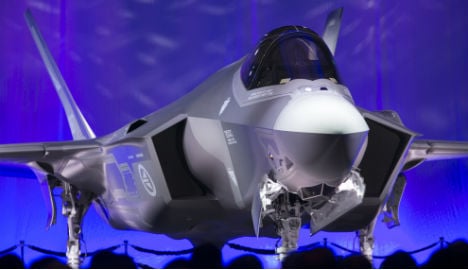 The first Norwegian F-35 fighter after it was rolled out of the Lockheed Martin plant on Tuesday. Photo: Laura Buckman / NTB scanpix
Norwegian Defence Minister Ine Eriksen Soreide was at Lockheed Martin’s F-35 production line in Fort Worth Texas on Tuesday to celebrate the roll-out of the two aircraft, the first of 22 already ordered by the royal Norwegian Airforce.
“We all know that the F-35 is not simply another fighter. We know that it is much more,” she said at the launch. “The F-35 provides us a capability we’ve never had before. It’s by far the most advanced fighter ever made.”
The F-35 has faced soaring cost increases over its programme, with the US alone spending some $323bn for development and procurement of the aircraft.
Norway’s Rear Admiral Arne Røksund in 2011 estimated that the 52 jets the country has eventually ordered to buy would each cost $769 million over their operational lifetime.
There have also been concerns over its advanced computer systems, which have been beset by frequent bugs, and may be vulnerable after the Lockheed Martin suffered a series of hacks.
“We have sorted out the problems now, and since 2012 has our production has gone as planned,” Lorraine Martin,  head of the F35 program for Lockheed Martin told NRK. “Production costs per aircraft have dropped sharply year by year. They are now 57 percent cheaper today than when we started development. In 2019, we hope that the price of the planes Norway have ordered will be dropped to $85m per aircraft.”
Allan Norman, a test pilot for Lockheed Martin told NRK that the plane’s advanced communications systems would be particularly useful for Norway.
“The aircraft can communicate with each other in a completely different way and over far greater distances than the F-16, and that means Norway can use fewer planes to cover a larger area,” he said.
The planes Norway has received today will now go to the Luke Air Force Base in Arizona where the first Norwegian fighter pilots to fly the plane will soon begin training.
“The first pilot in theory began training today,” Major General Per Egil Rygg told NRK. “There was obviously some jostling over who would be first.”
In its press release Lockheed Martin stressed how important the programme had been for the defence industry in Norway with more than $450m in contracts to date.