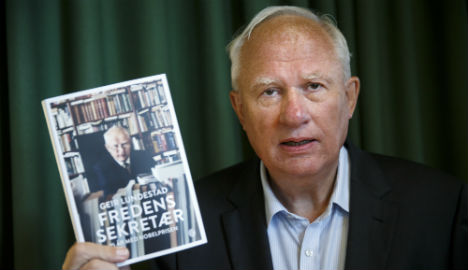 Released in Norway on Friday, the nearly 330-page book talks about the 25 Nobel peace prize winners awarded under Lundestad between 1990 and 2015.

In “Secretary of Peace” there is “little to no (information) about committee members' thoughts on the different prize candidates” during meetings, the Norwegian author said in a statement.

The Nobel Peace Prize committee released a statement on Monday accusing Lundestad of breaching its trust.

“Lundestad has violated on several points his promise of confidentiality” it said, adding that in 2014 the ex-secretary had signed an agreement binding him to confidentiality for 50 years.

But Lundestad, who did not have the right to vote during his tenure but still had influence, said that “public figures should tolerate being evaluated frankly”.

The author and historian writes that 2009 prize winner US President Barack Obama did not fulfil the committee's expectations and that 2004 winner Wangari Maathai — known for her conservation efforts — was not the best candidate for the prize.

The author also talks about some of the other members of the committee, and calls into question their international relations knowledge and language skills.

The five members of the Nobel committee, often former politicians, are appointed by the Norwegian parliament. This year's Nobel Peace Prize will be announced on October 9.